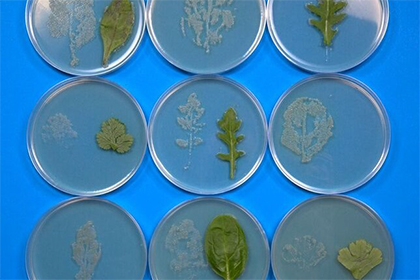 The British biologists showed that the use of the lettuce leaves cooled and placed in a plastic container is integrated to health hazards.

Scientists found out that at the salad placed in packaging in case of availability on its leaves of small damages to two times the probability of reproduction of bacteria of Salmonella enterica increases. Pathogens, on as researchers established, together with juice of a plant form microbic biofilms which show strong resistance to washing off.
During typical five-day refrigerated storage on leaves of the packed salad scientists found about hundred thousand separate bacteria of Salmonella enterica.

Initially salmonellas get on lettuce leaves in case of their cultivation in the open ground. There they get thanks to insects, birds and through fertilizers. However, according to authors of a research, Salmonella enterica can get on leaves and from the processed flowing water.

Scientists also showed that salmonellas can get to vascular system of plants from where they can’t be removed. Except salad, the pathogen can be found as well on the packed spinach.