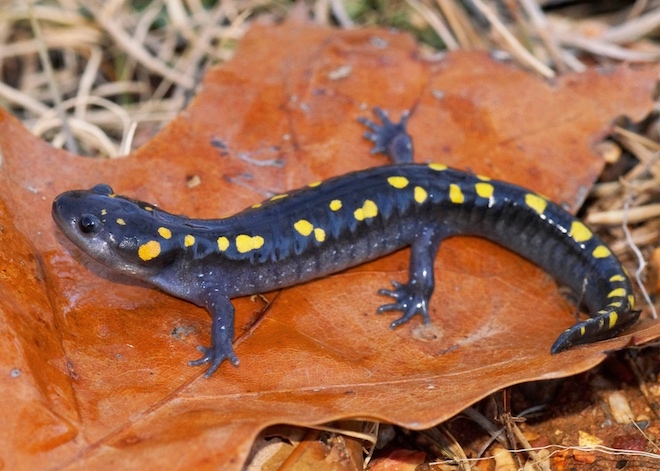 Few animals are capable of photosynthesis and until the last moment it was considered an impossible task for vertebrates. However, Ambystoma maculatuma, yellow-spotted Ambystoma, a kind of salamander distributed in North America, can use sunlight to create energy. Photosynthesis in the salamander is possible only in the embryo stage due to symbiotic relationships with algae.

The researchers found that when a tiny salamander develops inside the egg, the algae penetrate the egg and the embryo itself. There are mutually beneficial relationships based on nitrogen and oxygen.

Once in the salamander’s egg, the algae are attached to its mitochondria. The mitochondria produces energy for the animal’s cells from oxygen and the metabolic form of glucose. Algae transfer oxygen and carbohydrates (photosynthetic products) directly into salamander cells. A salamander can use these by-products to produce energy. In exchange, the embryo gives the algae nitrogen-rich waste and carbon dioxide.

Algae are also found in the oviducts of female yellow-sparse ambitions. The mother can have an alga from the beginning, and she gives it to the offspring, placing the eggs in the shell.

Knowing how this species of salamander – and perhaps other species – has such an unusual symbiotic relationship to algae will help to know how vertebrates distinguish their own cells from foreign substances, such as bacteria or viruses.