Sandy sea Namib in a photo from space 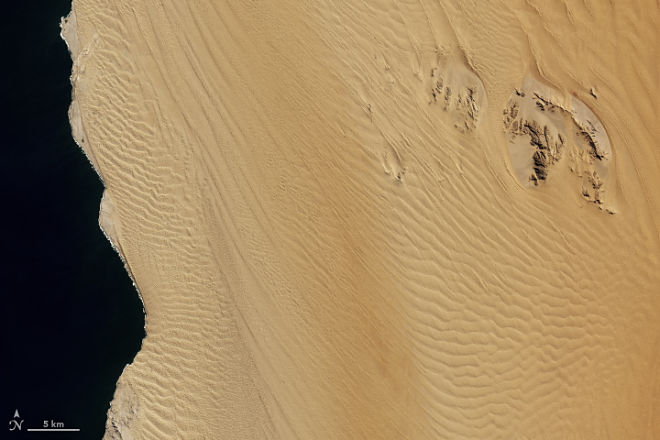 Namib Desert is located in the heart of Namib-Naukluft National Park, located on the coast of Namibia. Sand is predominant in most of the relief, but one percent is inzelbergs, or isolated elevations.

In the image above, received on July 5 with the help of the OLI tool on NASA’s Landsat 8 satellite, two inelzels in the desert are shown: Uri-Hauchab and Hauchab.

According to the report of the UNESCO World Heritage Center, more rain falls on the inselbergs than on the surrounding sand dunes. This is because warm air is pushed to the mountains by winds, causing water vapor to condense into clouds. In addition, near the elevation, more fog from the ocean is concentrated. Fog is the main source of moisture for the coastal desert of Namib, which is considered the oldest in the world.

A more humid microclimate provides inselbergs with a variety of vegetation compared to sand dunes. Inselberg Hauchab is distinguished by the vegetation characteristic of the Nama Karru biome (shrubs and grass), as well as the Succulent Carrus biome, famous for its spring flowers. Together these two biomes occupy the semi-desert region of Carr in southern Africa – an arid region that unites semidesert plateaus and intermontane depressions. There are 2 main parts with different terrain and climatic conditions: the Great Carrus in the north and the Lesser Carr in the south. There is also a separate area called Upper Carrau – this is part of the South African plateau. 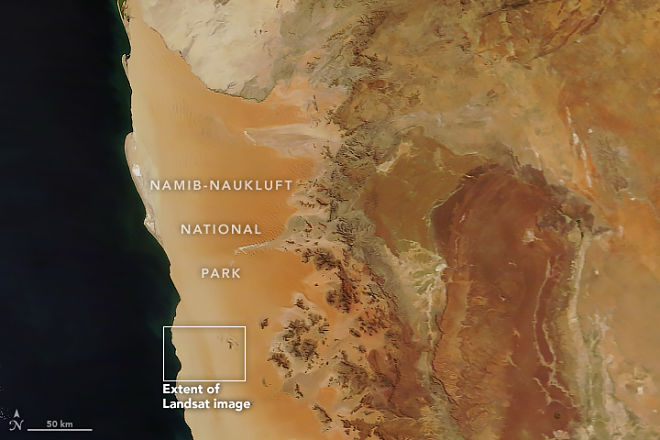 This image was obtained using the MODIS tool on NASA’s Terra satellite on August 10th. The sandy sea covers more than 1.2 million hectares in Namib-Naukluft Park. The National Park unites the Namib desert and the Naukluft mountain range, which serve as a refuge for Hartman’s zebras. The population of the Hartmann mountain zebra has greatly decreased in recent years. In Namibia there are about 15 thousand of these animals, which is 8 times less than in the beginning of the 20th century. The main reason for the decline in the population is the shooting off by pastoral farmers in order to preserve pastures for their livestock.

The sandy sea consists of two dune seas – one on top of the other. At the base is an ancient sandy sea, which existed for about 21 million years. Above it is a younger sand that has been active for the last 5 years. Sandy seas in other parts of the world are formed as a result of the erosion of the rocks beneath them, but the sandy sea of ​​Namib is unique – it consists of particles brought here thousands of kilometers away. Transported by the river, ocean current and wind, the sedimentary rocks were transported along the Orange River to the coast, where they were raised by winds and carried deep into the country.