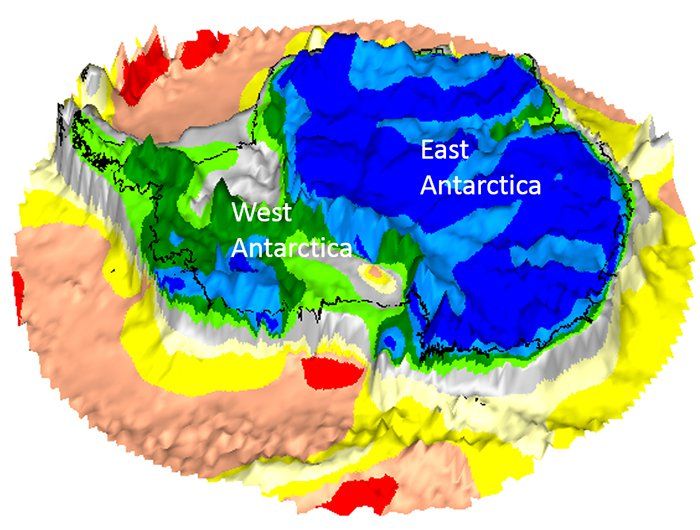 Of all the continents of our planet, the least we know about the ice of Antarctica. To expand these views, an international team of scientists using satellite imagery revealed the structure of this continent hidden from view.

Because of the remote location and the abundance of ice, it is difficult to identify the geological characteristics of Antarctica, but thanks to data from the GOCE (Gravity Field and Steady-State Ocean Circulation Explorer) satellite, scientists will be able to form a new idea of ​​how Antarctica was formed and its tectonic plates can function. The research results are published in the journal Scientific Reports.

“In East Antarctica, we see a fascinating mosaic of a wide variety of geological features that reveals fundamental similarities and differences between the Earth’s crust under Antarctica and other continents, which it joined up to 160 million years ago,” says one of the co-authors of the work of Fausto Ferraccioli (Fausto Ferraccioli ) from the British Antarctic Survey.

By combining GOCE readings with seismological data, the researchers were able to create a 3D map of the Earth’s lithosphere, consisting of crust and molten mantle. This lithosphere includes mountain ranges, oceanic spins, and rocky zones, called cratons, remnants of ancient continents embedded in their modern “descendants.”

“To get a more consistent image of the crust and upper mantle in 3D, we will combine satellite data with seismological data, which will allow us to more clearly understand how plate tectonics and the dynamics of the deep mantle interact,” says study co-author Jörg Ebbing from University of Kiel in Germany.

Among other things, scientists found that the crust and lithosphere of West Antarctica are more subtle than those of Eastern: the latter has a mosaic of old cratons alternating with thinner areas of rock, like India and Australia, with which it was once a single entity.

The data obtained are not only useful for tracking the remnants of ancient continents over the past 200 million years: they will also be useful in finding out how glacial plates above the main landscape can react to warmer temperatures.

With such a large number of variables that need to be taken into account in forecasts of melting of the Antarctic ice, any new knowledge can greatly facilitate the work of scientists. According to Ferraccioli, the gravitational images obtained will greatly assist researchers in studying the most unknown continent of the Earth.