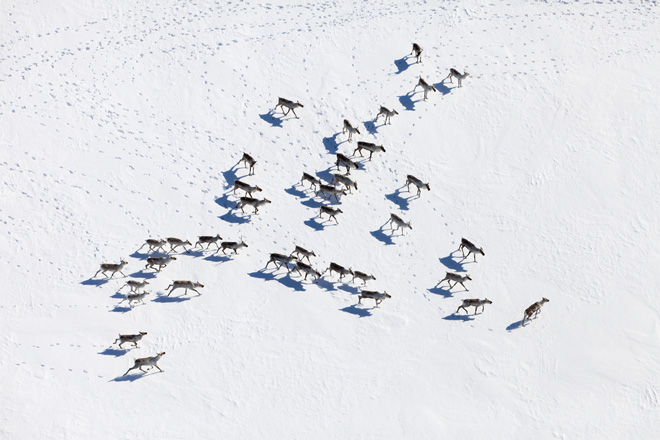 From the Arctic to Mojave Desert land and sea habitats of animals quickly change. Metamorphoses influence animals who are adapted to special ecological niches, forcing them to migrate or reducing their number. Satellites perfectly are suitable for overseeing by transformation of areas of dwelling and help scientists to predict as it will influence distribution, quantity and migration of animals.

Overseeing by an ice cover of the Arctic helped scientists to predict a 30% decrease in global population of polar bears in the next 35 years. Satellite pictures of the vegetation decreasing because of droughts in North America say about how also predators will feel local herbivorous. Satellite information on body height of a grass indicates that migration of reindeers to Far North of Russia is explained not by a repasture and deficiency of a forage.

Satellites of NASA and other agencies monitor changes of sea ice since 1979, and data show that the Arctic sea ice was reduced with an average speed of 53,1 sq.km a year during the period since 1979-2015. Now the status of populations of polar bears differs: in some areas of the Arctic bears become less, in others their number is stable and even grows.

The southwest of the USA will become even more droughty because of climate change. Loss of vegetation will affect not only on herbivorous, for example, the chernokhvostykh of deer: their main natural enemy, a puma, can suffer even more.

Scientists from university of the State of Utah (USA) studied pictures of efficiency of plants of a spectroradiometer of MODIS on the Terra and Akwa satellites, and also radiotelemetric measurements of population density of animals and their movements.

Herd of deer on the Taimyr Peninsula — the world’s largest. Taimyr population of deer was reduced by 40% since 2000, and now in herd of only 600 thousand animals.

Andrey Petrov from university of Northern Iowa (USA) studied historical information since 1969. Deer moved to the east, far away from human activity. At the same time the herd goes deep to the north in the summer to avoid high temperature and mosquitoes.

Taimyr deer are forced to travel for lengthier distances between summer and winter lands. Higher mortality becomes result olenit. Other factors which influence death of young growth — mosquitoes and early opening of the rivers which animals have to cross during migration.

Petrov also used data of the Lendsat satellite to define how presence of deer on summer lands influences vegetation. He found out that vegetable biomass decreased while deer were grazed, but several weeks later appeared again when animals left. The research excludes a repasture as a possible factor of a decrease of population of Taimyr deer since 2000.