Satellites showed accumulations of aerosols in the Earth’s atmosphere 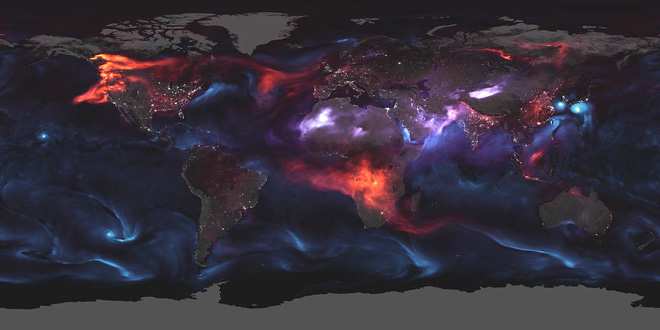 Take a deep breath. Even if the air looks clean, millions of solid particles and liquid droplets penetrate your body. These substances, known as aerosols, can be found in the atmosphere above the oceans, deserts, mountains, ice, forests and every ecosystem between them.

If you have ever observed smoke from a forest fire, volcanic ash erupting or wind-blown dust, you saw aerosols. Earth satellites of NASA, such as Terra, Aqua, Aura and Suomi NPP, also see them, only from a perspective hundreds of kilometers above the surface of the planet.

The NASA model version, called the Goddard Earth Observing System Forward Processing (GEOS FP), offers an extensive view of atmospheric aerosols on August 23rd. On this day, huge smoke trails stretched over North America and Africa, three tropical cyclones raged in the Pacific, and clouds of dust danced over the deserts of Africa and Asia.

Aerosol vortices of sea salt, which enters the air together with sea spray during a storm, are shown in blue. Particles of black carbon, marked in red, are among the particles emitted by fires, vehicles and industrial enterprises. Particles classified as dust are colored in purple.

The visualization includes night illumination data obtained with a VIIRS radiometer on the Suomi NPP satellite, which allow to see the locations of cities.