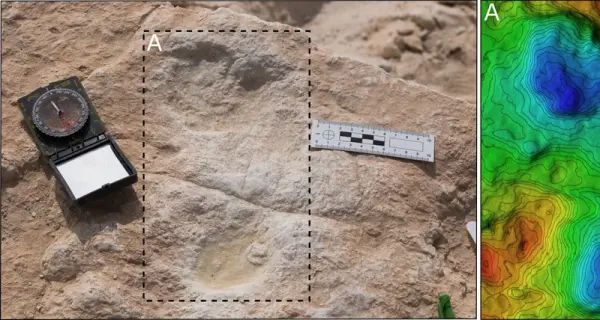 Paleontologists have discovered traces of humans and animals in what is now northern Saudi Arabia. This helped scientists establish more accurate migration routes for Homo sapiens from Africa to Europe.

Today the Arabian Peninsula is a large arid desert that would not have been very suitable for ancient people and animals that they hunted. But research over the past decade has shown that this was not always the case – due to natural climatic changes, the Arabian Peninsula was more humid during the last interglacial period and vegetation was more abundant. Arabia at the time was more like the semi-arid grasslands of the modern African savannah.

The authors of the new study, published in the journal Science Advances, investigated sediments in the ancient dry Lake Alatar back in 2017. There, scientists were able to find traces of humans and animals that are unique in their preservation. Researchers have found more than a hundred tracks, but only seven of them were found to belong to Homo sapiens.

The analysis showed that among the people passing through this place were two or three people who traveled together. The researchers argue that the tracks belonged to anatomically modern humans, not Neanderthals. This conclusion was made by paleontologists based on the fact that our extinct relatives, as you know, did not live in this region of the Middle East at that time. The researchers made this conclusion by assessing the height and body weight of people from their footprints.

Scientists also found traces of large animals near the lake, such as elephants and hippos. Presumably, ancient people could hunt them when they stopped in this part of the Arabian Peninsula. The discovered traces of people helped scientists to clarify the long route along which Homo sapiens migrated from Africa to Europe.