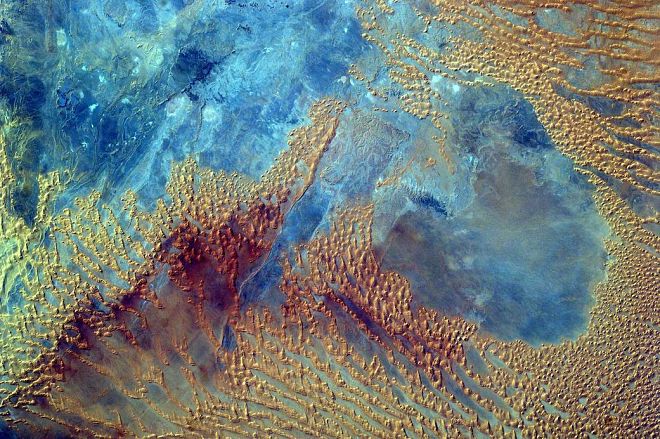 Magnificent landscape in blue and gold tones — the largest hot desert of the planet, the majestic Sahara. The picture is made from the International Space Station the camera “Sallie Rayd ERTKAM” programmed by school students.

Pupils of middle classes set up the camera so that it photographed this part of the Sahara Desert in the west of Libya on October 3, 2016. At the beginning of November, 2016 the crew of an expedition of the ISS-50 mounted the camera in an illuminator in the Harmony module. School students removed types and transferred images to Earth.

“ERTKAM” — the single program which provides school students with direct monitoring over the tool at the station which rotates around Earth. The project teaches children to an environmental science, geography and space communication. The initiator of the project doctor Sallie Rayd, the first American who visited space in 1995 appeared. The camera made five flights on space shuttles, and later went to the ISS together with an ISS-1 expedition in 2001.