Scientific substantiation of the existence of Higher beings 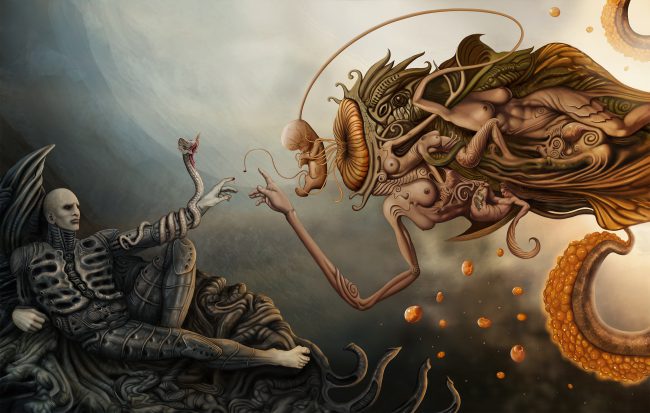 Who is to blame that we were born? Or perhaps the whole universe? If you believe in God, you have your answer. But we adhere to the scientific point of view and the scientific method. Some interesting studies suggest the possible existence of higher beings, which is responsible for our existence.

The universe should not be

According to some studies, the universe was not supposed to survive more than one second. For example, the Big Bang had to produce the same amount of matter and antimatter, which mutually exclude each other. Instead, it was made a bit more substance, from which emerged the entire observable universe. Finally explain that we can not.

In other theories the universe is the Higgs field that gives particles their mass. Large energy field does not allow our Universe to fall into the abyss in a deeper field in which the universe could not exist.

However, if the standard model of physics is correct, the rapid expansion of the Universe immediately after the Big Bang had to move it into the abyss. It was supposed to destroy the Universe before that would have been the second.

The improbability of life on Earth too crazy. Galaxy could not exist without the right mix of matter, dark matter and dark energy. Then the Earth must be at the right distance from the Sun. A planet the size of Jupiter had to pull a bunch of asteroids and comets, or the surface of the Earth would be too polluted.

So life is incredibly lucky or the universe somehow helped her?

The seed of life?

According to the theory of directed panspermia Francis Crick, life arose elsewhere and was sent to Earth developed beings. Before the theory of panspermia claimed that life came to our planet on an asteroid or a comet.

In July 2013, astrobiologist Milton Wainwright said that he found the real “seed of life”. Launching a weather balloon over England, he caught the metal ball width from the hair. The shell of titanium and vanadium contained biological slime. Obviously, many scientists are skeptical about the statements Wainwright. But how was it really?

The search for alien life in biology

In our genes, only 3% of 22 000 genes of the human genome. The other 97% is junk DNA that might contain a coded message or a “designer label” with indication of whether there is life anywhere else or was created by a Supreme being.

In 2013, two Kazakh scientists declared that have found an ordered sequence of the symbolic language of our junk DNA, which could not occur naturally. However, many critics rejected them as “alien” discovery in biology.

Geneticist Francis Collins in his book “the Language of God” wrote that DNA is the alphabet of God, which is written in the book of life.

In 2003 philosopher Nick Bostrom said that the universe could be a computer simulation, recently this theory was also adopted and Elon Musk. If so, then the simulation should be responsible Supreme being or creature. The universe must also be limited, since all computers have limitations.

Some scientists believe we can detect this computer simulation, we find the limits of the Universe. To test this, German researchers build simulators of the universe on the lattice in a quantum computer.

In the center of their attention was cosmic rays are fragments of atoms that are born outside of our Solar system. Cosmic rays have limited power and weaken over time.

The spread of life

In 2015, Harvard-Smithsonian center for astrophysics, a study was conducted that suggested that life had spread through panspermia, moving from star to star clusters and slips like bubbles in a kettle of boiling water”. This model also shows that life can spread like an epidemic.

The researchers tested two possible ways of adding life to the Earth by asteroids and using sentient beings. As a result, both of these options were possible, and would follow the same scheme. And if the study is right, life exists throughout the galaxy.

According to theoretical physicist John barrow, we can tell whether the universe is simulated, to find in it errors or flaws. Barrow believes that even an advanced civilization does not know all the laws of nature thoroughly.

In 2001, Australian researchers found evidence that the speed of light slowed down during the last billion years, despite the fact that it is contrary to the General theory of relativity. Astronomer John Webb discovered that the quasar light is absorbed the wrong type of photons during its journey to the Ground for 12 billion years.

This could happen only in case, if the speed of light or electron charge has changed; both are physical constants. Scientists will never agree.

The ontological proof of gödel

In 1940-ies physicist Kurt Godel tried to prove the existence of God by mathematical proof below. 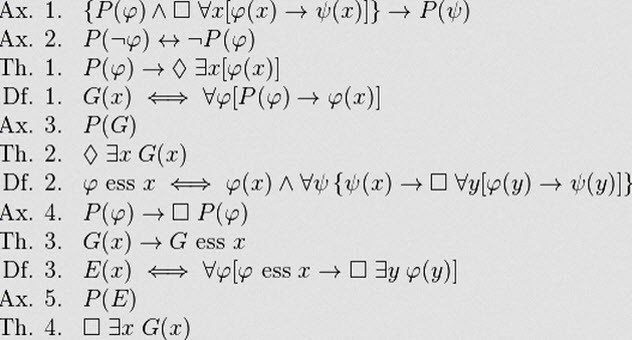 It is based on the argument of Anselm of Canterbury:

In 2013, two mathematicians came to the conclusion that the equations of gödel is correct. But this theorem does not prove the existence of God, but only the possibility that based on modal logic an omnipotent being can exist.

The video game creates itself, when you look in a certain area. Otherwise it does not exist. The reality may follow a similar principle: to exist only when you look at her.

This mysterious phenomenon originates from quantum mechanics. Subatomic objects usually are waves or particles. Sometimes both. Among some examples are the light and objects with mass close to the mass of the electron.

While these objects are not observed, they exist in a dual state. But when they measured objects “decide” to become a wave or a solid object. This principle lies at the heart of what we’re dealing with. Agree, not much different from the artificial world of video games.

In 1997, theoretical physicist Juan Maldacena suggested that our universe is two dimensional hologram — completely flat — which we perceive in three dimensions. Tiny strings — gravitons — vibrate and create this holographic universe. If his theory is correct, it will help to deal with a number of differences between quantum mechanics and Einstein’s theory of gravity.

Scientists at Fermilab use a giant laser to look for “holographic noise” that would indicate “buffering” in space. If three-dimensional holographic universe, built on a two-dimensional system of the moving lines (like lines of code), padline, it will be a strong argument in favor of modeling the universe.

According to theoretical physicist Sylvester James gates, convincing evidence indicates that we live in a simulation. Working on the superstring equations of adinkra (the symbols used in the algebra of supersymmetry), gates found the code created by the mathematician Richard Hamming. And think about whether this is a basic coding somehow to be relevant to the work of the universe.

Gates says that “an unexpected connection suggests that these codes can be widely disseminated in nature and may be embedded in the essence of reality. If so, then we may have a lot in common with movies like “the Matrix”, which depict a world where the experience of each human being is a product of virtual reality that generates a computer network”.