Scientist discovered an ancient insect inside a gem 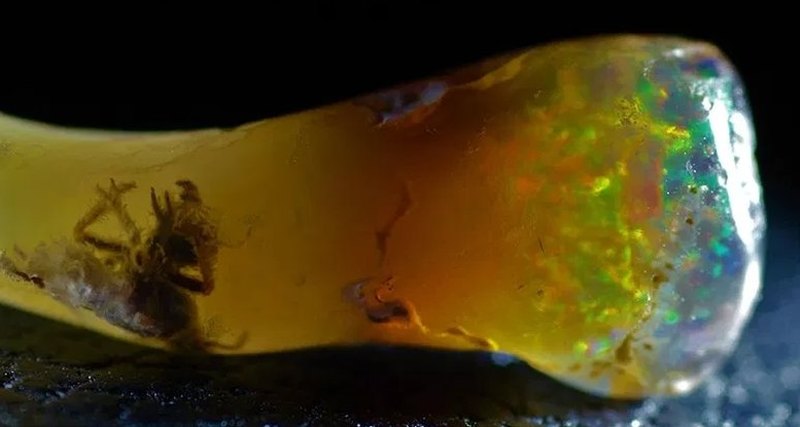 Usually, fragments of extinct flora and fauna are found in amber, a petrified resin of ancient trees. However, gemologist Brian Berger was lucky to find a whole insect inside a large opal – and science is not able to tell how it got inside.

As we have repeatedly written, the black markets of Southeast Asia are the real treasury for archaeologists – they trade in amber, which often contains fragments of flora and fauna that disappeared from the face of the Earth millions of years ago. However, last year gemologist Brian Berger discovered something much more rare and surprising.

In the purchased item, as in many others, there is an insect. But this is not amber – the fossilized resin of ancient trees – but the real precious opal! The origin of this mysterious mineral (more precisely, “mineraloid”) still remains a mystery to scientists.

In his blog for Entomology Today, Berger wrote that “in photos you can see a whole insect encased in a beautiful cage.” After a thorough examination, he found in him an intact mouth opening and even particles of some fibers on the appendages. It may seem that this is another fake. However, the Gemological Institute of America studied the sample in detail and issued a report with a certificate certifying the authenticity of the find. According to the report, this is a real (that is, not artificially synthesized), raw and intact precious opal, with a genuine inclusion in the form of an insect.

But how is that even possible?

Modern theories about the formation of opals suggest the presence of water with a high content of silica. For example, in Australia, where most of the opals in the world have been found, acidic groundwater leaches silica from rocks. When the pH of the solution stabilizes again, the silica precipitates in rock cracks and other cavities. They also include pockets, which are formed as a result of the impact of acidic water on calcium carbonate in ancient bones – this is how we get “fossilized” fossils.

In Indonesia, where Berger got his unique sample, most of the opals are of volcanic origin – they are formed in the process of cooling volcanic liquids. The water in the melt flows down and, like sedimentary opals, deposits silica in the cracks.

As you can see, in both cases, hollow holes are necessary. And amber is not a cavity.

Geologist Ben McHenry notes that “even though it seems strange, but the process of embmerization (the formation of amber) is in many ways similar to the process of being finalized.” He suggested that one of the ways in which opal could have been formed could have anything to do with an opalized tree — many such objects are found in Indonesia. And since wood is a natural source of amber, resin with insects could flow into some deep crack in the trunk before the trunk itself became opal.

However, so far this is only one of the theories. Let’s not forget that the insect somehow could have been perfectly preserved inside the opal. In order for an article to be stone, amber is needed for millions of years (most of the substance that is sold as amber is actually “dug,” a cross between amber and ordinary resin). In addition, the opal itself requires an impressive time to form, which means the insect itself is very ancient, probably one of the oldest known today.

The sample is currently undergoing further research, so that in the future its mystery may be revealed. Entomologists and paleontologists, who are also eager to learn more about the mysterious insect locked inside the gem, also joined in the case.