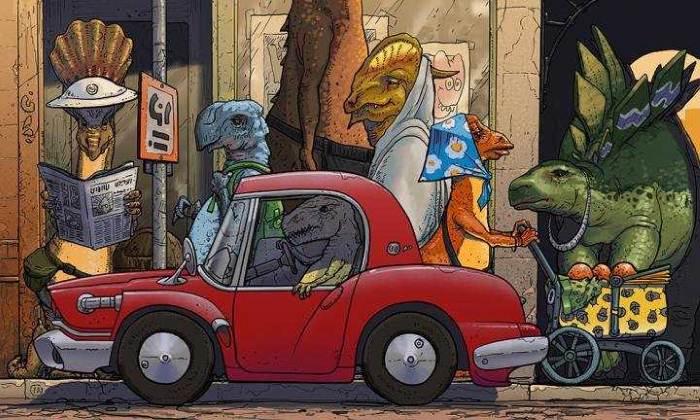 The new, Silurian hypothesis considers the possibility of the existence of another technologically advanced civilization in the distant past of the planet.

If on Earth long ago there really existed another technologically advanced civilization of intelligent animals, then for tens of millions of years all direct evidence must have disappeared. The continents have changed, the ocean floor has been refreshed, but traces could have been preserved in ancient geological rocks. And although there is no evidence to this yet, Professor of the University of Rochester Adam Frank (Adam Frank) and his colleague from NASA Gavin Schmidt (Gavin Schmidt) offer to look for them more closely.

In an article published in the International Journal of Astrobiology, the scientists put forth a curious thought experiment. In fact, the paradox of the lack of any evidence of the existence of another intelligent civilization in the universe can be explained by a variety of reasons. Life on the planet may simply not arise, not develop to complex forms, not reach the level of intelligent beings – and if it does happen, civilization may simply not survive long enough, having disappeared as a result of a global nuclear war, a climatic or other catastrophe. After all, our own technogenic culture is several hundred years old, but nothing guarantees that it will exist even at least as much.

In this regard, Frank and Schmidt raise the question of which trace can leave humanity on the geological scales of time – in the tens and hundreds of millions of years. “Gavin and I did not find any traces of other industrially developed civilizations,” Adam Frank stressed. Their Silurian hypothesis, named after the mythical ancient country, proved to be an extremely instructive mental experiment.

Today we have entered an era that many experts confidently call an “anthropocene” – a period when human activity exerts a significant influence on the entire planet, changing its lithosphere, atmosphere, and the ocean. This era is characterized by massive use of fossil fuels and nuclear energy. The authors identify other aspects, traces of which could have been preserved for an indefinitely long time: global warming and large-scale application of fertilizers, erosion as a result of agricultural activities, accumulation of plastic contaminants.

Separately, scientists pay attention to the Paleocene-Eocene thermal maximum, which happened shortly after the extinction of flightless dinosaurs. “Soon” – according to geological standards: these events are divided about five million years, during this time on Earth (theoretically) the civilization could fully develop and die. The abnormal temperature increase of that era, in principle, could be the result of the activity of a developed civilization, all traces of which have worn off over the next tens of millions of years. And although there is no evidence of this, the Silurian hypothesis forces us to take a fresh look at the chances of finding intelligent beings on other planets – and the fragility of our own world.