Scientists are close to the “resurrection” of extinct white rhinoceros 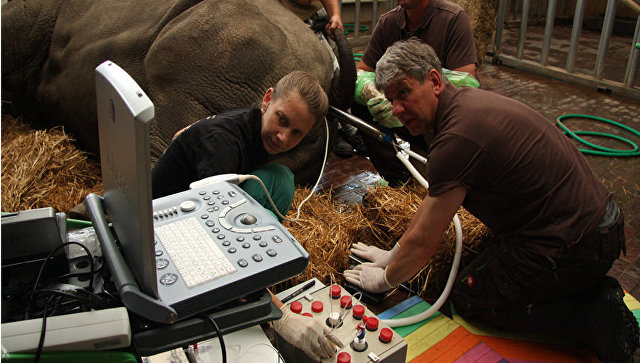 European biologists created the first “hybrid” embryo of an extinct white rhinoceros, combining their sperm with the eggs of their usual African kin. The results of the first experiments with these embryos were published in the journal Nature.

“In the near future, we plan to go to Kenya and retrieve the eggs from the bodies of the last two females of the northern white rhinoceroses, they will allow us to create” clean “embryos of these animals.Then we will do the same procedure using eggs and sperm grown from” reprogrammed ” cells of these animals, “said Thomas Hildebrandt of the Leibniz Institute in Berlin, Germany.

A light in the end of a tunnel

The emergence of new technologies for DNA sequencing, cloning and reprogramming of cells have opened up new opportunities for rescuing already extinct or as yet endangered species of animals. As scientists hope, tissue samples of such animals will help modern or future ecologists “resurrect” these species and restore their populations.

For example, back in 2011, scientists from the Scripps Institute in La Hoya (USA) created the first stem cells of extinct northern white rhinoceroses and disappearing baboon drills using samples of their frozen tissues. These experiments gave hope that biologists could turn such cells into full-blown embryos of disappeared animals.

Hildebrandt and his colleagues took the first step towards realizing these plans, creating the first viable embryos of extinct northern white rhinoceroses, the last of which survive in the zoos of Asia, Africa and other continents of the world.

At the beginning of the 20th century, their population numbered approximately three thousand individuals. Predatory hunting and civil wars in central Africa led to the fact that by the beginning of this century their numbers in the wild have fallen to three dozen rhinoceroses. The last of them died in 2008, which marked the failure of all attempts by ecologists to restore their population in a natural way.

The last hopes were laid on four white rhinoceroses, two males and females living in zoos and nurseries in the USA, the Czech Republic and Africa. The males suddenly died in 2015, as a result of which the “male line” of white rhinoceroses completely disappeared. The females were transported from zoos to Kenya, where they now live under 24-hour protection.

When the rhinoceroses died, Hildebrandt and his colleagues extracted testes from their bodies and froze them in the hope of keeping the germ cells in order to use them in the procedure of artificial insemination.

To do this, as shown by further experiments, was not as easy as it seems – all three rhinos, whose genetic material was preserved, were old enough animals, and their semen was initially in very poor condition. In addition to this, scientists subsequently discovered that their reproductive cells were defective and could not penetrate into the eggs themselves.

In solving these problems they were helped by technologies created by Italian biologists for artificial insemination of horses. Using these gadgets and techniques, Hildebrandt and his colleagues extracted the eggs of southern white rhinoceroses from the body of several female “donors”, and introduced into them nuclei of spermatozoa, treating them with powerful but short current pulses.

Only a year ago, after two years of unsuccessful experiments, biologists managed to find the right combination of such techniques, which led to the successful fusion of germ cells and the formation of a blastocyst, the first stage of embryo development, on which it can already be returned to the womb of the animal.

In total, Hildebrandt and his colleagues created four hybrid embryos of the northern white rhinoceros – two males and two females. All of them were frozen and, as the scientists hope, in the near future will be implanted in the body of surrogate mothers from among the southern white rhinoceroses.

If these experiments succeed, scientists will extract the eggs from the body of the last two representatives of this subspecies, fertilize them and try to extract embryonic stem cells from them. They, like their “reprogrammed” cousins, as the ecologist hopes, will help scientists to restore the population of these rhinos as quickly as possible.