Scientists are developing houses for the Martian colony 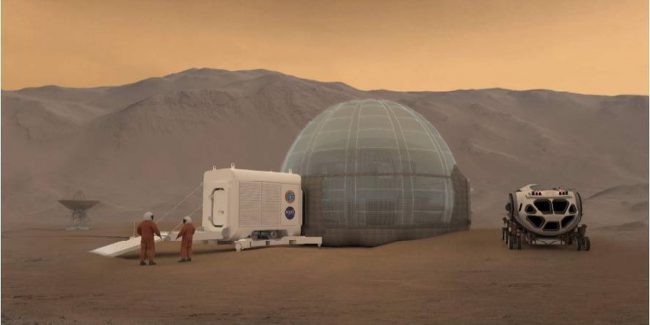 In November, scientists at American University of Texas said that the plain of Utopia, located in the Eastern part of the Northern hemisphere of Mars, whose diameter is about three thousand kilometers, contains approximately the same amount of water as lake superior in North America. On Mars, however, this water is in a frozen state that can definitely be on hand for the future Martian colonists. The ice is very shallow, soil layer, according to the latest data, over him hardly more than ten meters, so the team engineering design NASA proposed to use this frozen water to the Martian construction of houses.

Project Manager Home Ice (the Ice house), Kevin Kempton, sure that the needle is best at the moment, the Martian solution “housing problem”. His team took great care to design the alien houses, and even provided the public with a few sketches.

The idea of development of the concept of the ice house is to make deployable or inflatable structure that can be used as a skeleton for a future dwelling and the effective deployment of mobile workspace. The ability to successfully work and live comfortably in the new difficult conditions is essential for success. If you can use the Martian ice for the construction of residential areas, this will reduce the amount of building materials sent to the Red planet. Developed house is like a needle in appearance, but in fact, its multilayered structure is much more complicated. Here’s the handy Martian ice, which can be used as filler between the shielding layer and one of layers of the exterior wall of the home. The materials from which it is expected to produce such a needle, specially chosen so that they were translucent, so the walls will transmit light.

This is not the first concept of the Martian Igloo offered for the last time. Last year the designers of the Space Exploration Architecture and Clouds Architecture Office also came to the conclusion that the ice house could be a good option to live and work for future colonists. It remains to solve the issues with gravity, pressure and many more.