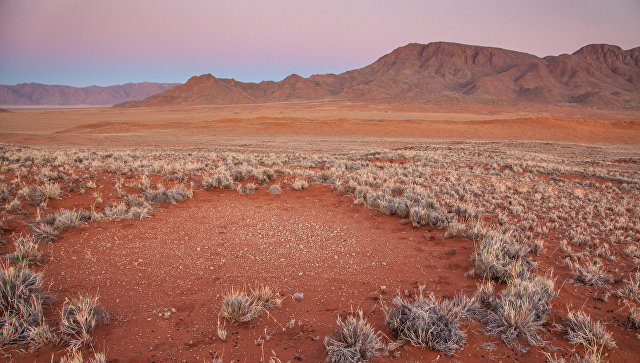 Mysterious circles of vegetation that are common in the deserts of South Africa, arise not only due to the activity of termites, but also competition desert plants for resources.

In the arid steppes of the Atlantic coast of southern Africa often meet the so-called witch’s circles in size from 2 to 40 meters. They consist of rings constantly green grass, which does not dry up in the dry season, and devoid of any vegetation bald spots in the center. The circles can be up to 75 years, they appear and disappear for no apparent reason.
Some scientists believed that the reason for their appearance may be the plants themselves or the geochemical characteristics of the soil, others felt that the case in the ants and termites or even in the self-organization of vegetation. Three years ago, biologists from Germany found hints that the termites Psammotermes allocerus really involved in the organization of these circles, analyzing the device several tens of thousands of these mysterious structures.

Robert Pringle (Robert Pringle) from Princeton University (USA) and his colleagues came to the conclusion that in fact, in their birth, and involved plants, and insects, analyzing data collected by their German colleagues, and examining some witch circles in Namibia.
As noted by Pringle, the main weakness of the thermite hypothesis is that all the witch’s circles have almost the perfect shape – ring plants in them form the right circles, and these structures themselves are usually removed from each other at equal distances. Critics of this idea believe that insects can’t paint them with such precision, eating the roots of the plants just where it needs to be done.

The authors checked whether it’s actually creating a computer model of multiple colonies of termites living in the desert, using the data that they received during their travels in Namibia.

A key factor in the performance of this model was that scientists noticed that in vedminy circles usually lives not one, but several colonies of insects of similar size that prevents them from killing each other and forcing to coexist, respecting the invisible boundaries of spheres of influence and occasionally engaging in border conflicts.

More than the sum of the elements

These boundaries, according to calculations of scientists, in a special way affect the formation of new colonies, in fact, forcing the termites to found new settlements in a kind of hexagonal mesh – about the same as located “witch circles” relative to each other in Namibe and other African deserts. Accordingly, it is possible to say that termites do play an important role in the formation of circles.
On the other hand, plants actively control this process, thus affecting how moisture is distributed around the tunnels that the termites dig in the soil around their colony. Seeking to penetrate its territory, where more water than in other parts of the desert soil, plants compete for the water, causing them there grows much more than in other parts of Namibia. If a termite colony dies, the plants gradually begin to grow inside her former territory, filling the circle with greens.

When the inside of the green circle there is a new colony of termites, the process begins again, only now the “witch’s circle” has not one, but two rings of green. Thus, as suggested by biologists, formed all similar structures in the deserts of South Africa.

Why do they exist? According to calculations of scientists, termites stabilize climate conditions, protecting plants from prolonged droughts due to the accumulation of a large number in one place and the emergence of soils rich in water. Such a self-sustaining system of plants and insects can play a much greater role in the life of Earth’s ecosystems and in reducing the area of deserts than we believe today, conclude the authors.