Scientists are studying the causes a powerful earthquake in the U.S. in the 19th century 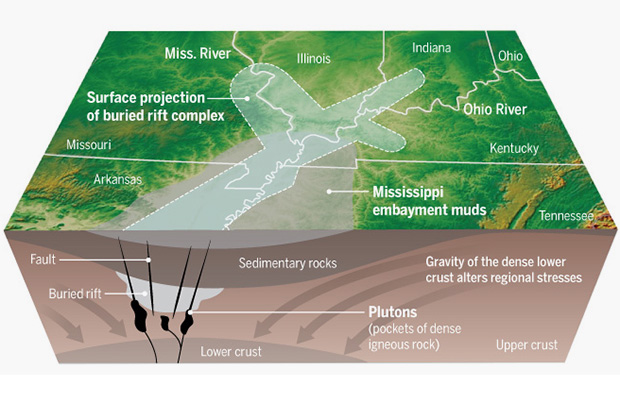 American and Mexican geophysicists called the cause of the strongest earthquake, which occurred in the XIX century in the area of the new Madrid seismic zone. Then, according to eyewitnesses, part of the Mississippi river for some time flowed backwards. Devoted to the study published in the journal Geophysical Research Letters.

The cause of the earthquake, the scientists saw in the rift — long, round depression in the bark, which originated 540-700 million years ago, formed when the North American plate. This has led to its deformation — under new Madrid seismic zone, as the researchers note, and is encountered in the ancient rift.

It contains a layer of dense lower crust, which over time is lowered. This process is accompanied by release of energy of deformation that leads to earthquakes. Colleagues earlier scientists had already put forward such a hypothesis, however, only in the latter study, it was possible to verify experimentally and to confirm by means of computer simulation.

The earthquake is interesting because it is located in the center of the North American plate. Similar devastating disaster occurs, as a rule, in the vicinity of tectonic faults, therefore their nature is more understandable to scientists.

Three earthquakes of magnitude more than 7.0 in the area of the new Madrid seismic zone occurred in 1811-1812. They are the largest known earthquakes East of the Rocky mountains in the United States. Geophysics plan to make a detailed seismic map of the territory to continue to use her to predict future disasters.