Scientists conducted a study of the ecosystems of the Permian period 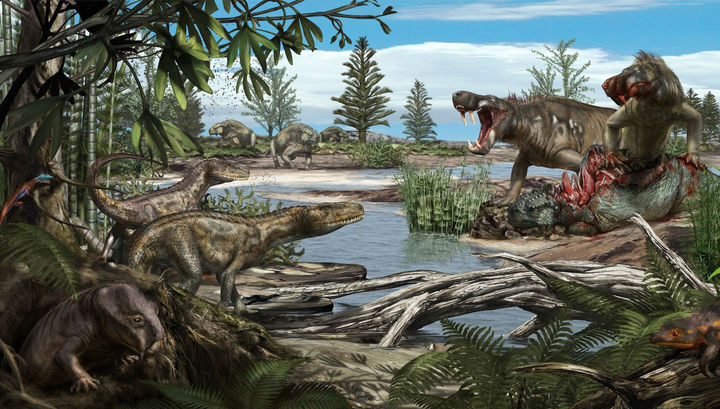 The Permian period ended 252 million years ago with one of the largest mass extinctions in the history of the Earth. What was the living world of the planet on the eve of this great cataclysm?

The answer to this question is not so simple. Well-preserved finds are, but they are scattered in different parts of the Earth and belong to different ecosystems. The picture is mosaic.

Summarize the available data and add to them a new large international team of paleontologists headed by Massimo Bernardi (Massimo Bernardi) from the MUSE Museum in Italy undertook.

First, the researchers conducted their own field work in Bletterback, Italy. “Bletterbuck is a unique place because of many different species, not that there were more separate species there than usual, but these species are really diverse and represent very different groups in the animal kingdom,” the press release of the study quoted the co-author of the article Evelyn Eustyn Kustatscher. Based on the findings of his findings, he and his colleagues reconstructed the ecosystem that characterized this area in those ancient times.

Then the authors, basing on the work of their predecessors, compared 14 best preserved ecosystems of the late Permian period among themselves. They compared data on plants, fauna (on the discovered tracks and skeletons) and the interaction of plants with insects. The geography of the finds is diverse. Here are represented Italy, Russia (among other things, in the term “Permian period” the name of the city of Perm is immortalized), China, Central Europe, Morocco, Niger, Brazil, Tanzania, Malawi, Zambia, India and South Africa. Researchers were interested in habitats and the relative abundance of different taxa of plants and animals.

As was to be expected, they found that the animal and plant world varies greatly with breadth. The most diverse were the ecosystems of medium and low latitudes found in Italy, Morocco and Niger. Ecosystems of higher latitudes were much less diverse.

A unique place in this respect was the equator. He played a role simultaneously as a “museum”, where species were preserved, in the higher latitudes long extinct, and “cradles”, where new species appeared unusually. Blatterbak was at that time exactly on the equator, although now this locality is much to the north. This is the result of the dance of the continents, about which “Vesti.Nauka” (nauka.vesti.ru) was told in detail.

The large-scale picture, drawn by the authors, will help to better understand the causes of the Permian extinction, among which the formation of Pangea, the activity of microbes, acidic oceans and other factors. Now this is especially important for humanity. After all, according to some studies, another mass extinction is happening right now. And at least some of the changes in the biosphere are due to global warming, in which most climatologists blame the person.