Scientists could turn back aging of stem cells 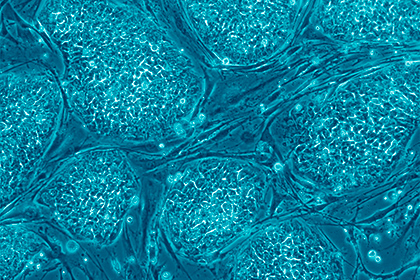 Scientists from School of medicine of university of John Hopkins for the first time rejuvenated the embryonic stem cells (ESC) of the person by means of specially developed chemical “cocktail”. The received biological material will allow to improve results of treatment by means of ESK and modeling of genetic diseases. Article of researchers is published in the Development magazine. Briefly reports about scientific work to EurekAlert!.

Classical embryonic stem cells of the person were allocated in 1998 from a blastocyste — to an early stage of development of a germ at which the fetus represents a ball from two various populations of cells. These ESK had to become replacement to the mouse stem cells capable to turn into any other cells and to easily giving in genetic manipulations. However soon it became clear that ESK of the person hardly survived in vitro and could be transformed only to some types of tissues.

Geneticists could understand the reasons of such differences, having opened a new type of stem cells at rodents. They were found in the germ which already passed a stage of a blastocyste and attached to a uterus mucosa. These cells were only one couple of days more senior than usual mouse ESK, however on the properties bore to the “stagnated” embryonic stem cells of the person very a strong resemblance. Thus scientists understood that the last are the grown old “flexible” ESK and they can be rejuvenated.

Geneticists developed so-called “3i-cocktail” which consists of three substances inhibitors participating in a regulation of cellular development for this purpose. The first drug suppresses an alarm way of WNT which is responsible for an embryogenesis, development of specialized cells and body height of tumors. The second switches off the way of ERK participating in growth of tissues and augmentation of mobility of cells. The last substance — a tankiraza inhibitor — represents an anticancerogenic agent.

The admixture allows to transform classical ESK of the person, having allocated them with ability to turn into any cells of an organism. At the same time in them there are no mutations which are a side effect of other methods of reprogramming. As showed experiments, the updated stem cells two-three times more successful are transformed to the vascular and nervous tissues suitable for transplantation.