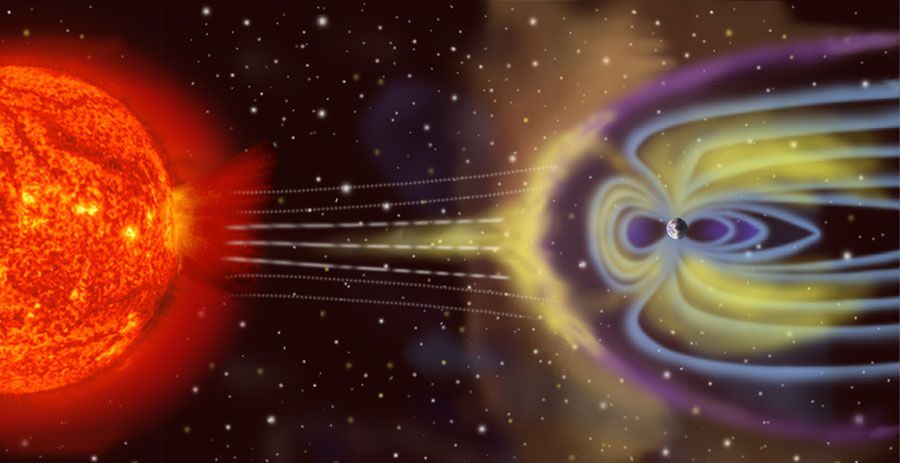 The Earth’s magnetic field extends between the poles of the planet and experiences a powerful impact from the solar wind. This “wind” is a stream of charged particles constantly erupting from the surface of our luminary. Sometimes on the Sun flares occur, as a result of which the streams of the solar wind increase significantly; to an even greater intensification of the solar wind lead high-energy events, called coronal mass ejections, as a result of which plasma flows are ejected into outer space.

The resulting flux of charged particles passes millions of kilometers from the Sun to the Earth. When these particles arrive on Earth, they distort the magnetic field of our planet. The result can be both delightful, in the case of the awe-inspiring auroras appearing in the sky, and very destructive if particle flows damage satellite communication systems and GPS or terrestrial electricity distribution networks. Long-term observations have shown that solar activity is so chaotic that its prediction is a very difficult scientific and practical problem.

However, in the new work, scientists led by Reik Donner of the Potsdam Institute for Climate Studies, Germany, report on a new method for analyzing magnetic field measurement data that can improve the quality of short-term forecasts of geomagnetic storms. This new method is applicable to systems far from equilibrium, which is the Earth’s magnetic field, continuously interacting with the solar wind. In their article, the authors give graphs called recurrent graphs based on the reconstructed data and analyze them using a method called the quantitative recurrence analysis for the case of two geomagnetic storms that occurred in 2001 immediately after the solar flares preceding them. According to the results of the analysis, the long diagonals on these graphs indicate more predictable changes in the geomagnetic situation. This method of data analysis is most effectively used to distinguish between fluctuations of the Earth’s magnetic field of different types. The method allows researchers to characterize these differences with a previously inaccessible level of accuracy, the authors indicate.