Scientists create model of climate change for the next 100 years 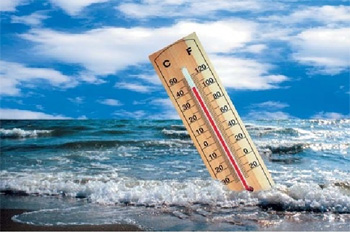 Climate model of the future. Scientists from Nizhny Novgorod, as part of an international team of experts, create an algorithm of climate change for the next at least hundred years. Whether such long-term forecast? How to calculate with mathematical precision the time and strength of natural disasters? And what are the consequences of global warming?

Weather for mid-February are fairly typical — about zero, snow, overcast. A hundred years ago, that temperature would be called abnormal.

Alexander Feigin examines how the weather changes on the planet. At the Institute of applied physics, Nizhny Novgorod for several years to create a model of future climate. A group of scientists have to answer is, perhaps, the main question of this century.

“As a result of the observed rise in average temperatures to any such drastic changes — what is called in science a “critical transition”? There can be a change of regime with a significant change in living conditions”, — says Alexander Feigin, head of the Department of atmospheric physics and microwave diagnostics IAP RAS.

A creation of climate models — it’s like a complicated math problem. Success depends on the accuracy of the data, and they come from satellites and weather stations around the world, and the methods of their analysis. International team in Nizhny Novgorod, Moscow, Los Angeles and Potsdam.

On another video conference with Germany, the Russian scientists have an opportunity to discuss plans and results with our German colleagues.

“The start date of the monsoon in India was predicted two weeks earlier than it was before. It is extremely important for agriculture: if the seeds are sown too late, they will be washed from the soil, if, on the contrary, they sow too early, they will wither,” explains jürgen Kurtz, head of interdisciplinary research at the Potsdam Institute for research of climatic changes and their consequences.

The prediction was accurate due to the detailed study of the phenomenon “El niño” in the Equatorial Pacific ocean. The increase in water temperature in this region cause a change of the weather on the planet.

“In 2010 there was a significant increase in temperature. You can associate this event with the subsequent development of droughts in the summer on the European part of Russia”, — says Dmitry Mukhin, head of the laboratory of modeling of climate systems IAP.

Everything is interconnected. That melting glaciers spawned frequent polar storms. Squally wind up to 40 meters per second, and with it, the waves — a threat to ships and to the coastal zone.

“Of course, the prediction of such phenomena is a very important problem and here it is necessary to know the interaction between the underlying surface and the atmosphere, what we just studied in this pool,” says Yuliya Troitskaya, head of Department of nonlinear geophysical processes IAP RAS.

The calculation and estimation of the Nizhny Novgorod physicists show that the increase in the average temperature of the planet by one degree will lead to a rise in the number of lightning by 10 percent.

“According to forecasts will increase the number the most dangerous storm events including positive lightning is “cloud-land””, — believes Evgeny Mareev, the head of the Department of geophysical research, IAP RAS.

A study of lightning in Nizhny Novgorod, and work to create the climate models of the future funded by the program of state mega-grants.