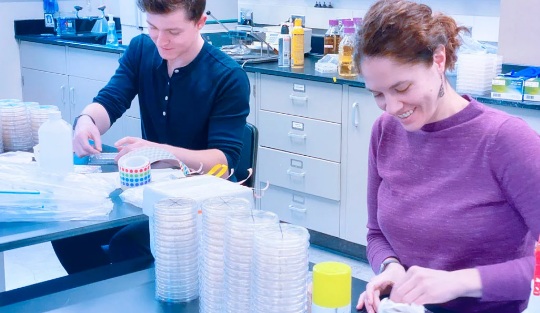 The US Department of Energy has allocated $ 1 million to researchers at the Cornell Institute for Energy Systems that create programmed microbes to mine rare earth metals used in consumer electronics and advanced renewable energies.

According to the US Geological Survey, most of the world’s rare earths (17 in total on the periodic table) have been mined in China over the past quarter century. But the processes of extraction and separation of valuable elements from slag create toxic waste and cause serious damage to the environment.

This project by researchers from Cornell develops the concept of biological mining of rare earths in the United States.

“Biology offers an alternative to the environmentally damaging way we currently mine and purify rare earths.

Biological possibilities are very promising; we just didn’t take advantage of it. Our new technologies can help revitalize the US rare earths industry and provide a new source of these critical elements for future energy technologies, ”said Principal Investigator Baz Barstow, assistant professor of biological and environmental engineering at the College of Agriculture and Life Sciences (CALS).

Rare earth elements increase the production of wind and solar power, and manufacturers of consumer electronics such as smartphones rely on these elements for applications to work properly.

The rare earths industry in the United States thrived 30 years ago, but has subsequently suffered from a lack of new mining technologies and economic inefficiencies. With the advent of new biological methods for extracting these elements, Barstow said, this American industry could be revived.

“This could demonstrate the potential of engineered microbes to tackle sustainable energy challenges, including artificial photosynthesis, battery rejuvenation and recycling, biofuel production, and carbon capture and sequestration. This can help to rapidly expand the adoption of sustainable energy technologies, ”- describes the prospects for the new opening of Barstow Bases.

The research team will begin by developing a microbe (Gluconobacter oxydans) to dissolve monazite, a phosphate rock containing the rare earth elements erbium, thorium and lanthanum.

“We’ll take a microbe that can dissolve minerals in rocks, and we can get the microbe to extract these minerals faster and more efficiently. We can more selectively extract these rare earth minerals. ”- Baz Barstow

Scientists grow synthetic monazite crystals in a furnace with a specified concentration of rare earth elements. These crystals will be made available to a group of synthetic biologists for leaching experiments with various strains of gluconobacteria.

The goal is to test the effectiveness of these synthesized organisms in extracting rare earth elements from ore.

“This process takes place in nature, but very slowly. For example, metals are leached from minerals as a result of weathering processes, and some of them are biologically mediated, so seawater is salty. It’s continental sodium that made the oceans salty
This is a large part of the evolution of the planet and the natural cycles of the elements.

We are in an entirely new field that combines synthetic biology experimentation with our understanding of minerals to address the challenges of the 21st century, ”the researchers say.