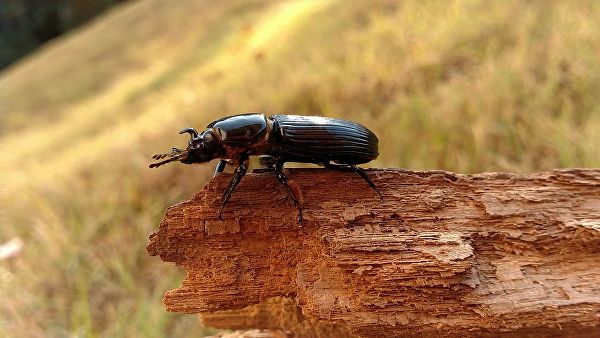 Parasitic nematodes penetrating into the body of stag beetles make these insects apathetic and passive, dulling their instincts and “helping” predators to eat them. The description of these “invisible puppeteers” was published in the journal PLoS One.

“We have shown that even if the parasite does not kill its current host, it noticeably impairs their ability or propensity to self-defense and to repel the attacks of competitors. In general, these changes in their behavior were not very noticeable, but they manifested themselves at a key point in time. No animal would want to lose the ability to defend itself at the moment when it is attacked by a predator, “said Andrew Davis from the University of Georgia in Athens (USA).

In recent years, biologists have discovered dozens of examples that parasites can directly control host behavior. For example, the LdMNPV virus causes silkworm caterpillars to climb to the tops of the trees and turn into a viral bomb. The feline parasite Toxoplasma is able to “reprogram” the memory of humans and mice, making the first prone to suicide, and the second – fearless.

The most “advanced” and interesting example of such parasites “puppeteers” – fungi of the genus Ophiocordyceps, affecting ants living in tropical forests of South and Central America. When this “zombie” fungus enters their bodies, it radically changes the behavior of the insect, causing it to attach itself to the branches and leaves of the trees above the anthill and above the paths along which its inhabitants go in search of food into the forest.

Further observations of the behavior of the infected ants and the fungi themselves have shown that Ophiocordyceps acts in an extremely selective manner, testing their brains for compatibility before “zombification”. If these fungi themselves did not suffer from parasites, then they could easily and very quickly destroy almost all the ant colonies in the New World.

Davis and his colleagues discovered another curious example of how a parasite can control or simply influence the behavior of its host by observing the lives of several hundred stag beetles of the species Odontotaenius disjunctus.

These insects are ubiquitous in the forests of the United States, where they live inside a rotten brushwood, stumps and other fragments of decaying wood. As a rule, these insects live in fairly large colonies, actively communicating with their relatives using a complex system of signals, warning them of predator attacks or other events using chirring.

These insects, as noted by Davis, very often become victims of parasitic nematode worms of the species Chondronema passali, thousands of which can live inside the abdominal cavity of the same beetle. These parasites, unlike the zombie ant fungi or the caterpillar virus, do not kill insects or deprive them of their ability to reproduce, and in general almost do not manifest themselves.

Scientists are interested in whether these worms can somehow influence the behavior of beetles and manipulate their actions. To test this idea, they caught and raised several hundred healthy stag beetles, infected some of them with nematodes, and began to follow their lives.

Sometimes Davis and his colleagues imitated predator attacks, pushing or pinching beetles with tweezers. At the same time, biologists observed how the work of their bodies changed during a similar stressful situation and compared these measurements with what happened to healthy beetles.

As it turned out, the parasites did not manifest themselves before naturalists did not “attack” the stag beetles – the behavior of the infected individuals was generally the same as in healthy beetles. When a threat to their lives appeared, carriers of the worms resisted it much less actively, less often trying to escape from tweezers or attacking it, but at the same time emitting danger signals.

California biologists have discovered an unusual bacterium that causes the simplest single-celled animals, distant relatives of sea sponges, to “lose shame” and turn into a kind of “sex-bombs”, constantly reacting to reproduction with neighboring cells.

In other words, the appearance of parasites significantly influenced the behavior of beetles, making them more passive and malleable for attacks by predators. Why do worms do this? As scientists assume, such “reprogramming” causes beetles to expend less energy in normal and critical situations, allowing nematodes to extract more nutrients from them.

Davis believes that other parasites can influence the behavior of their victims in a similar way, changing how they react to stress and other stimuli. This may explain why many other living things die much more often if parasites invade them, the scientists conclude.