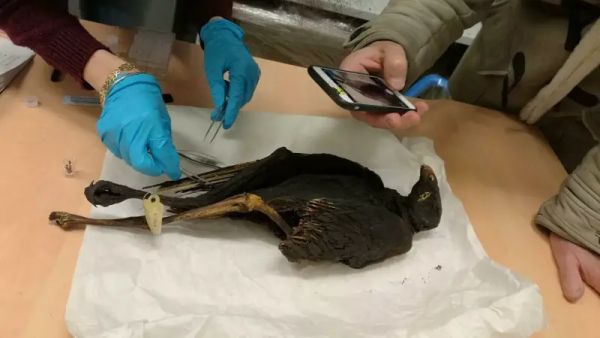 The ancient Egyptians caught wild ibises in great numbers and sacrificed them to the gods. This is the conclusion reached by French scientists who conducted isotopic studies of bird mummies from ancient Egyptian burials. The results are published in Scientific Reports.

In the necropolises of the Nile Valley, archaeologists find millions of bird mummies, mostly ibises. It is believed that the birds were sacrificed to the ibis-headed gods – Horus, Ra and Thoth. However, until now it was not known whether these birds were wild, hunted, or they were bred on purpose, like cats – other sacrificial animals, whose mummies are also found in ancient Egyptian burials very often.

Scientists at the French National Center for Scientific Research (CNRS) have carried out extensive geochemical analyzes of the mummies from the Fusion Museum in Lyon. According to their results, these were wild birds.

To determine the origin of the birds, the authors took tiny samples of feathers, bones and embalmed viscera from twenty mummies. They determined the isotopic composition of oxygen, carbon, nitrogen, sulfur and strontium in the samples and compared the results with similar data for human mummies.

The researchers assumed that in the case of domestic breeding, the isotopic composition would be uniform and close to human mummies, regardless of whether the birds were given special food or they ate the remains of human food.

However, the isotopic composition of the carcasses showed high variability and “exotic” features, from which the scientists concluded that the birds were wild and flew to the Nile Valley during periods of seasonal migration. In addition, hunting scenes are depicted on the walls of some tombs, for example, on the frescoes of the tomb of Nakht in the Theban necropolis.

Another argument in favor of the hypothesis of capturing wild birds is the fact that birds are found in burials at all stages of development – adults, chicks and eggs, while all mummies of cats belong only to adult animals.

The radiocarbon dating of the selected tissues made it possible to determine the age of the mummies. It covers a significant period from the Ancient Kingdom (third millennium BC) to the era of Roman rule in Egypt (I-III centuries AD).

According to scientists, all this time, the Egyptians actively hunted ibises and other birds of prey, which led to a sharp decline in their numbers. At present, the ibises, widespread in the period of Ancient Egypt, are under threat of extinction. Their limited populations have survived only in the rocky deserts of Syria and Morocco.

In addition to birds and cats, archaeologists have also found mummies of other mammals and reptiles in ancient Egyptian burials.