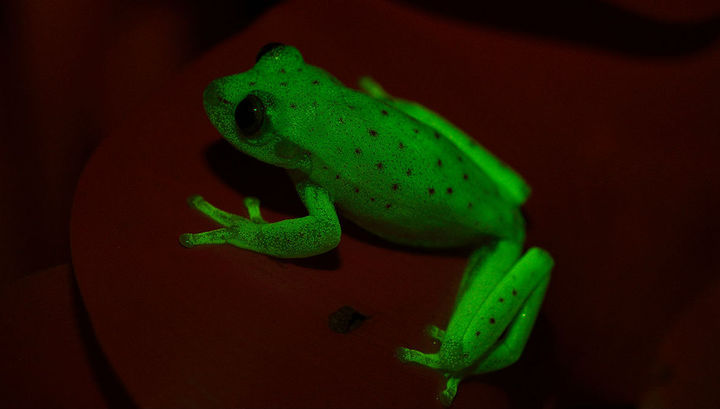 In daylight, the color of a South American tree frog or a tree frog (Hypsiboas punctatus) is quite common: you can see soft green, yellow and red colors. But it’s worth dulling the light and turning on the ultraviolet light, as this little creature begins to glow with bright blue and green light.

The ability to absorb light on short waves and “re-emit” it on longer wavelengths is called fluorescence, and it can rarely be found in terrestrial animals. To date, such a “talent” has never met with amphibious creatures.

The researchers report that the frogs use completely unique fluorescent molecules, and they are markedly different from those found in other animals.

Let us explain that the process of fluorescence requires the absorption of light, so that it does not occur in pitch darkness. It is this key moment that distinguishes fluorescence from bioluminescence – the ability of organisms to emit their light, generated by chemical reactions.

Many inhabitants of the ocean have this property: corals, fish, sharks and one species of sea turtle – the Bisce (Eretmochelys imbricata). But among the inhabitants of the land the ability to fluorescence was previously detected only in parrots and some scorpions.

Experts still do not know exactly why animals need such a feature, but they assume that it plays a role in communication, disguise and attracting the attention of a partner.

Initially, biologists, studying the tree frog H. punctatus, believed that they could detect red fluorescence. The thing is that these frogs have a special pigment – biliverdin.

In general, as a rule, biliverdin gives amphibian creatures a green color, but some insects bind proteins to this pigment, resulting in a weak red fluorescence, says the herpetologist Carlos Taboada of the University of Buenos Aires. However, in the quasis studied, biliverdin turned out to be a “distracting maneuver”.

Taboada and his colleagues collected several frogs living near the Argentine province of Santa Fe to learn how they react to ultraviolet radiation. It turned out that with the light of the UV flashlight, the tree frogs emit an intense greenish-blue glow, and not the pale red that the scientists expected to see.

“We simply could not believe it,” said co-author of the study, herpetologist Julián Faivovich of the University of Buenos Aires.

A further study showed that three molecules (hyloin-L1, hyloin-L2 and hyloin-G1) in lymphoid tissue, skin and gland secretion of animals are responsible for green fluorescence. The molecules contain a ring structure and hydrocarbon chains, and they differ from the previously studied fluorescent molecules.

True, the molecules found are slightly similar to those found in plants, says another author of the study, a chemist from the University of São Paulo, Norberto Peporin Lopes.

Today, little is known about the visual system or photoreceptors of frogs under study, so Taboada intends to focus on their research. Its purpose is to understand if animals can see their own fluorescence.

“All this is really impressive, because of the research there are still more questions than answers,” says marine biologist David Gruber of New York University. Recall that he and his colleagues discovered fluorescence in 2015 in bisces.

Fajvovich plans to look for the ability to glow in the dark in the other 250 species of tree frog, having a translucent skin, similar to H. punctatus. He hopes that it will not be one. “I very much hope that other colleagues will be interested in this phenomenon and will begin to carry a UV flashlight,” he concludes.