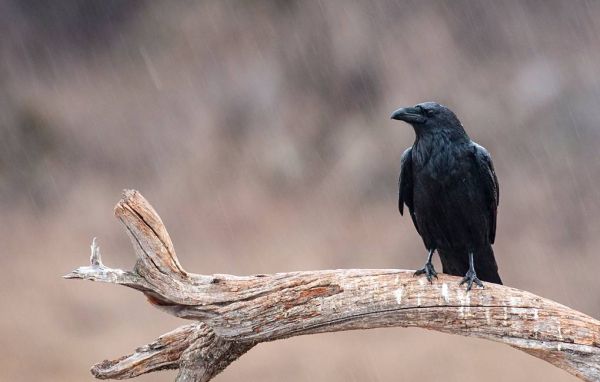 Zoologists have adapted the popular method of measuring the intelligence of monkeys to work with crows, the smartest representatives of the bird world. Subsequent measurements showed that even young birds were not inferior in mental power to the closest human relatives, scientists say in an article in the journal Scientific Reports.

“Research in recent years shows that the level of mental development of members of the corvid family is not inferior to monkeys and small children. However, until recently, we did not have accurate estimates of their level of intelligence. For the first time, we systematically tested their cognitive abilities and found that even four-month-old chicks of common ravens are not inferior to primates, “biologists write.

Recently, biologists have found that almost all birds of the raven genus are very mentally developed. They overtake many species of mammals and other birds in solving puzzles and difficult practical problems. The smartest representatives of the corvids are the New Caledonian crows (Corvus moneduloides). Like some monkeys, they know how to make and use tools.

Common ravens (Corvus corax) are almost as smart. In particular, several years ago biologists proved that crows are quite vindictive – they can remember the faces of individuals and associate good or bad deeds with them. They know how to put themselves in the shoes of other birds and be aware of their intentions, including the desire to steal their food.

Zoologists led by a professor at the University of Osnabrück Simone Pieck wondered who is smarter – crows or primates. It used to be difficult to find out because researchers who study these animals used different approaches to assess the individual mental abilities of birds and monkeys.

The authors of a new study have solved this problem. They adapted the popular primate intelligence test, PCTB, to work with birds. It consists of fifteen simple puzzles and tasks, each of which assesses the spatial thinking of ravens and primates, their ability to put themselves in the place of others, arithmetic ability and skills in using tools. Scientists have adapted some of these tests, taking into account the fact that birds do not have hands, and their vision works in a completely different way from monkeys.

Pica and her colleagues tested this system on eight common crows. All of them were grown in conditions that closely resemble those of the wild. All the birds knew the experimenters well and willingly communicated with them. Thanks to this, scientists were able to test how birds will cope with tasks without any coercion on their part.

These experiments showed that the intellectual abilities of birds developed very quickly. By about the fourth month, the crows were not inferior in development to adult birds: they successfully solved the same set of problems as adult crows. Sometimes crows were even superior to adults in solving problems of spatial reasoning and the ability to put themselves in the shoes of others.

Comparison of the abilities of ravens and chimpanzees showed that the former were inferior to the latter only in tests for spatial thinking. This greatly surprised the scientists. They expected that crows, who often hide their prey in various caches, would do better at such tasks.

Why this is so is not yet understood. However, Pica and colleagues suggest that this is primarily due to the fact that mathematical and social mental skills play a much larger role in the life of birds than the ability to perform mental manipulations with space. Whether this is true or not, subsequent experiments will show, Pica and her colleagues conclude.