Scientists found a spider similar to the sheet 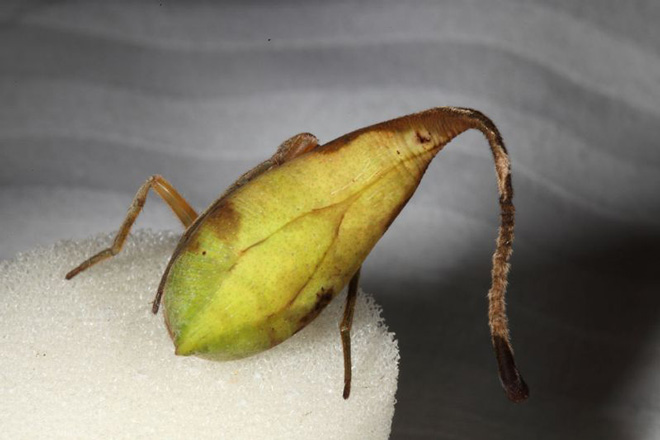 In the animal Kingdom the best strategy for survival is to pretend to be what really are not. Thus it is possible to ambush prey or to convince predators that delicious lunch they do not Shine.

Recently, scientists have discovered a spider that uses a unique masquerade to hide in plain sight. This is the only known spider that has an uncanny similarity with ragged dry leaves.

Nonagenda spider belongs to the genus Poltys in the family of Orb-web spiders, which includes more than three thousand species.

Many insects have a body similar to plants. For example, a detachment privedeniya includes hundreds of species of stick insects that look like bare twigs or leaves. A bright Orchid mantis with legs in the form of the petals take the form of harmless flowers, tricking other insects that carelessly fly up to them.

About 100 species of spiders also used methods of masking for which look lifeless and unappetizing, pretending to be a bunch of twigs, plant debris or dirty ball bird droppings.

But the spiders, taking the form of a sheet, met for the first time. Scientists have tracked down and photographed an unusual spider in 2011, in the Chinese province of Yunnan. The female, they found, was sitting on a branch, surrounded by dead leaves. Her back looked like a living green leaf, and the lower side of the body was brown like a dead leaf. From the abdomen were hairy, steblevanie education.

The leaves near the spider was attached by silk. Probably the insect was attached deliberately to further camouflage themselves. After two weeks of searching, scientists were able to find only one sheet-like spider, a young bull, sitting on the web.