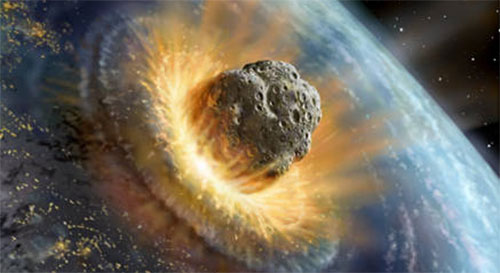 After 10 million years after the extinction of the dinosaurs the Earth collided with a cosmic body, an asteroid or comet. That could cause global warming and rapid increase in the diversity of animal species.

The discovery occurred accidentally, the researcher Polytechnic Institute Rensselaer Megan Fung was looking at the Jersey shore, the remains of single-celled organisms, associated with the period postnatalnogo thermal maximum, but instead stumbled upon microtektites — a small dark glass beads, representing presumably the residue of cosmic dust. In addition, the process of the study species were found particles of charcoal, which indicate strong forest fires in the area of impact.

The results of the study were presented at the annual conference of the American geological society a group of scientists led by geochemist Morgan Schaller. During the event, experts also suggested that cosmic body, probably, was a few kilometers in diameter, and fell on rich carbon layer, which caused a strong release of carbon into the atmosphere and increasing the temperature for a sufficiently long period of time.

Podneperovie thermal maximum was marked by a sharp rise in temperature at the Earth’s surface, in the upper layers of the ocean and the changing isotopic composition of atmospheric carbon.