Scientists found in amber an unknown creature with a triangular head 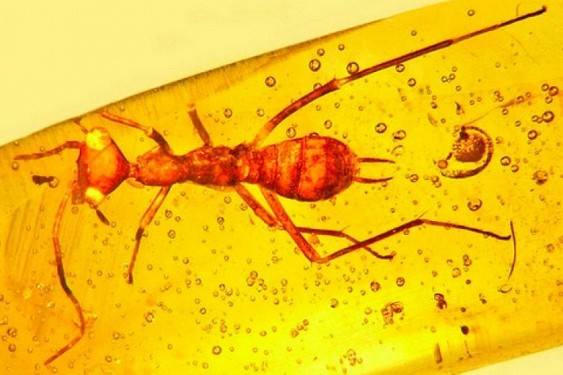 Scientists from the University of Oregon (USA) in the journal Cretaceous Research described a previously unknown insect science, whose age is about 100 million years.

A strange creature is not related to any of the 31 known orders of insects, although reminiscent of the modern ant. It was discovered in Myanmar in the piece of amber, whose age is estimated at 100 million years.

Researchers have isolated him in a separate squad, called Aethiocarenodea. And the creature brought to mind Aethiocarenus burmanicus, named after the mine, where they found amber.

“I’ve never seen anything like it, says Professor Emeritus of entomology George Poinar. – This insect is triangular head of correct shape with bulging eyes that makes it look like aliens from a science fiction movie. Probably, it had a viewing angle of 180 degrees and could see everything happening behind.”

Scientists suggest that members of the species Aethiocarenus burmanicus was omnivorous, lived in bark and were able to move quickly. Their feature was the mounting head. It moved only in the horizontal plane – left and right. Modern insects have triangular heads are moving vertically up and down. According to Poinar, the discovery of a new unit – an exceptional case.