Scientists found in Russia the oldest plague on Earth 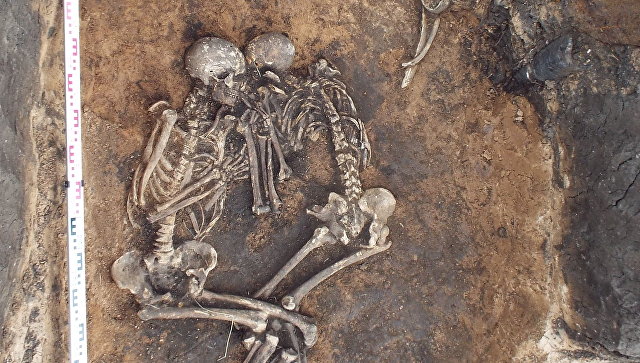 Genetics “resurrected” the genome of the most ancient plague bacillus on Earth, traces of which they found on the bones of ancient people who lived in the vicinity of Samara about 3,8 thousand years ago.

“We managed to restore the genome of the plague rod found in the remains of people living in the vicinity of Samara at the end of the Bronze Age, markedly different in DNA from earlier versions of these microbes and was completely adapted for distribution through fleas,” says Johannes Krause) from the Institute for the Study of the History of Mankind in Jena (Germany).

Krause, the famous “necromancer” -paleogeneticist, and his colleagues have been working for several years to restore the history of the largest epidemic in the history of Europe – the so-called “black death” caused by a plague stick, Yersinia pestis. In 2011, the Krause group restored the genome of this bacillus, and a little later found mutations that turned an innocuous soil bacterium, a pseudotuberculous bacillus, into a “scourge of God” of the 14th century.

Relatively recently, in February 2016, Krause and his colleagues made a very unexpected discovery – studying the bones of the victims of the outbreak of the plague in Marseilles in the 18th century, they discovered that the epidemic was caused by the same strain of Yersinia pestis that caused the “black death.” This was an extremely big surprise of scientists, as they believed that this species of microbe disappeared, giving way to less infectious and deadly strains of plague bacillus.

Trying to understand how this could happen, the Krause team began to search for traces of the plague in different parts of Europe and Asia, and found in the Stavropol region traces of the plague that existed in the Old World in the Stone Age. This plague wand, as scientists learned, could not spread through fleas, which was supposed to contain its epidemics.

Continuing the genetic “excavations” in Russia, Krause and his colleagues came across an even more interesting example of a “fossil” plague that could be considered the forerunner of the “black death” and all other major epidemics of this disease on Earth, studying the bodies of two people buried together in one tomb in one of the mounds in the vicinity of Samara.

Their remains were kept unusually well, which allowed scientists to understand that one of the skeletons belonged to a man of potentially Proto-Slavic or of simply Indo-European origin, and that he contained a lot of scraps of DNA from the ancient Yersinia pestis.

The bones of the second person, whose gender and ethnicity could not be determined, were also covered with traces of plague bacon, suggesting that they died of infection together and were buried at the same time.

When Krause’s team “resurrected” this microbe, whose genome they could read several dozen times, a surprise awaited her – it turned out that the plague rod from Samara was completely unlike the bacterium whose remains they found in the Stavropol region.

Unlike her “southern” cousin, in the DNA of the Samara Yersinia pestis there was a ymt gene necessary for life inside the stomach of fleas. This, coupled with the fact that the same bacterium killed two people at once, suggests that it spread from person to person in the same way as “black death”, the plague of Justinian and other large outbreaks of infection in the past.

Moreover, as a comparison of their genomes showed, the Samara plague can be considered a “grandmother” of all these epidemics, and a confirmation of Krause’s theories that the rapid settlement of Indo-European peoples in the Old World could be caused by an outbreak of plague that destroyed or weakened the tribes of hunter-gatherers, populated Europe and Asia about 40-35 thousand years ago.