Scientists found out when the first volcanoes appeared 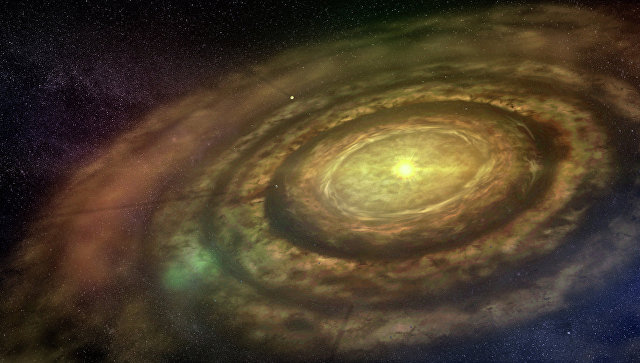 A unique meteorite from Mauritania helped scientists to find out that the first volcanoes of the Solar System began their life already 4564 million years ago, in the first three million years of life of our planetary family. This conclusion was reached by geologists who published an article in the journal Nature Communications.

“The meteorite NWA 11119 is the first unequivocal example of the fact that volcanoes originated in the Solar System before the Earth and other stony planets were born.The discovery and study of other similar asteroids will help us understand how the ancestor of NWA 11119 originated and how Mercury, a similar composition, “says Ryan Zeigler, a planetologist at NASA’s Johnson Space Flight Center in Houston, USA.

The solar system began to form about 4.6 billion years ago as a result of the gravitational collapse of a giant interstellar molecular cloud. Most of the matter went to the formation of the star – the Sun, and from the rest of the matter, which did not hit the center, a rotating protoplanetary disk formed, from which subsequently the planets, their satellites, asteroids and other small bodies of the Solar System arose.

Planet-giants, according to planetologists, reached their current dimensions very quickly, in the first ten million years of the life of the Sun, until the gas and dust of the protoplanetary disk were “blown out” into the open space by the solar wind and the ultraviolet rays of the young luminary. The Earth and its “neighbors” formed much longer, several hundred million years. Scientists are still arguing about exactly how this happened.

The problem, as Zeigler explains, is that the Earth’s lithosphere is constantly changing and is being updated due to plate movement, volcanism and other geological phenomena. For this reason, there was not a single sample of the “primary” matter of the solar system left on our planet that could clarify the mysteries of its birth.

The only source of such information today is the fragments of the most ancient asteroids that formed in the early days of the life of the solar system and fell on our planet recently. In recent decades, geologists have found dozens of such “heavenly stones” in northern Africa, Morocco and Mauritania, as well as in Antarctica and some other parts of the earth, almost untouched by man.

In December 2016, the inhabitants of Mauritania found another “guest” from space, a unique half-kilogram meteorite NWA 11119. When he fell into the hands of Zeigler and his colleagues, his matter became the key to solving many puzzles of the early evolution of the Earth and other planets.

Its uniqueness lies in the fact that it consists not of the most primitive forms of the primary matter of the solar system, like almost all other ancient asteroids, but of pyroxenes, feldspar, plagioclases and other volcanic rocks that arise at high temperatures and pressures.

When scientists analyzed the proportion of isotopes in this meteorite and calculated its age, they were surprised to find that it was not formed at the same time as the rest of the stony asteroids, but actually at the time of the birth of the solar system, about 2.5-3.5 million years after the launch of thermonuclear reactions in the bowels of the luminary.

In turn, its mineral and chemical composition suggests that this asteroid is almost indistinguishable in its design from the emission of volcanoes on Mercury and some of their “brethren” on Earth, spewing out particularly dense and “alkaline” magma.

They can exist only on the surface of celestial bodies with a sufficiently “developed”, layered structure of the interior. This suggests that the first real volcanoes and associated geological processes have appeared in the solar system since its birth, which greatly changes the picture of its evolution, scientists conclude.