Scientists found out why the plague has not yet disappeared 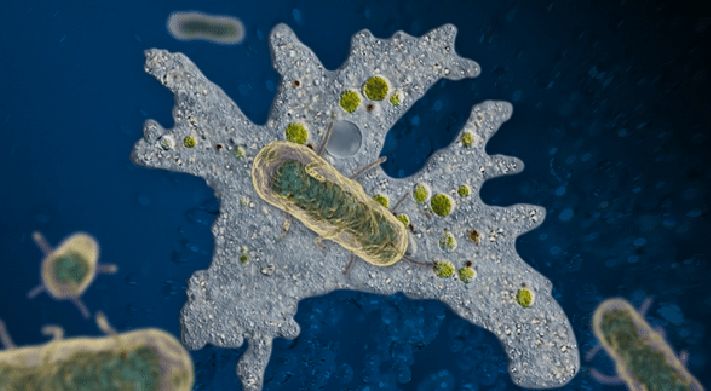 The plague has not yet disappeared from the face of the Earth, for the reason that its causative agent, the plague wand, can hide inside amoebae using a special protein that is a kind of signal “do not eat me,” says an article published in Applied and Environmental Microbiology .

“As a rule, the plague of Yersinia pestis spreads from one rodent to another rodent with the help of fleas, periodically falling into the confinement of man.When rodents are small and the bacteria are difficult to spread from one victim to another, she hides in amoeba and waits for a more convenient moment,” – Says Viveka Vadyvaloo of the University of Washington in Pullman (USA).

Humanity has experienced several large-scale epidemics with similar symptoms, which are described as “plague.” The first was the plague of Justinian, which broke out in Byzantium and the Mediterranean in the mid-6th century and claimed the lives of over 100 million people. Another similar episode was the medieval “black death,” which killed about a third of Europeans in the mid-14th century, and outbreaks of plague in Asia in the 18th and 19th centuries.

In the last few years, geneticists have been able to extract the DNA remains of these bacteria from the bones of their victims and prove that they were all caused by different, but similar strains of the same bacteria – Yersinia pestis. As paleogenetics today consider, the plague accompanied the evolution of mankind throughout the time of its settlement across Europe and Asia in the last 15-10 thousand years, periodically disappearing and appearing.

Vadivalu and her colleagues were interested in how the plague could live so long and not disappear from the face of the earth during another major epidemic, killing all its carriers even before they managed to spread microbes to new populations of rodents or humans.

Trying to understand why this is not happening, scientists have drawn attention to the fact that many microbes can survive even if they are “swallowed” by so-called macrophages – specialized cells of the immune system that destroy microbes and are similar in their kind and behavior to amoebae And other protozoa. Such a trick, as the scientists note, have mastered both Yersinia pestis and many other dangerous pathogens.

This prompted scientists to think that amoeba can act as natural reservoirs and carriers of plague. They tested this idea by growing and mixing the colonies of the three most dangerous strains of the plague bacillus and the colony of ordinary amoebae soil Acanthamoeba castellanii.

After a while, the scientists filled the tube with the substance that killed the plague wand, and checked to see if the living cells of Yersinia pestis are present in amoebas. To do this, biologists “dissolved” the cellular membranes of amoebae and placed the resulting “cocktail” from their entrails into a medium that favored the growth of bacteria.

As it turned out, the bacteria really survived, and began to multiply, having got into favorable conditions. The secret of their survival was a special protein, which Yersinia pestis produced in large numbers and which meant “do not eat me” in the chemical language amoeba. When scientists removed the gene responsible for the production of this molecule, the plague rods began to dissolve when they got into the amoeba, which confirmed the key role in the survival of the microbe inside the amoeba.

Scientists believe that such a “symbiosis” of bacteria and amoeba can explain why the plague did not disappear after major epidemics in antiquity, and continues to bother mankind today in the developing countries of the world. Observations of how the plague rod and amoebae interact in the soils of such regions can help the frequency of outbreaks and plague epidemics, the authors conclude.