Scientists have bred monkeys with Alzheimer’s and Parkinson’s 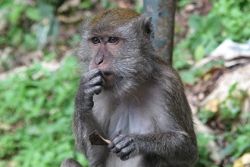 Japanese scientists have deduced genetically modified monkeys suffering from Alzheimer’s and Parkinson’s. The purpose of cruel genetic modification, which was subjected to monkey, has become a necessity in experimental animals for testing new drugs. Relevant information was spread by the portal Gizmodo.

Genetically modified primates, represented by a member of the University of Tokyo Hideyuki Okano, demonstrate the clear symptoms of Parkinson’s disease are already on reaching the age of three.

Genetics under the guidance of Okano isolated modified variation of the human SNCA genetic sequences responsible for the development of Parkinson’s disease, and then introduced it into the genome of monkeys. During the first years of his life, experimental monkeys experienced some sleep disturbances, and then their brain started to be detected Lewy body, that is, testifying to the pathology protein structures inside neurons.

By the third year of life in monkeys appeared characteristic of Parkinson’s disease tremor. Which is as susceptible to the disease of the people is eliminated, for example, the drug L-DOPA, suggesting the possibility of using monkeys to test new