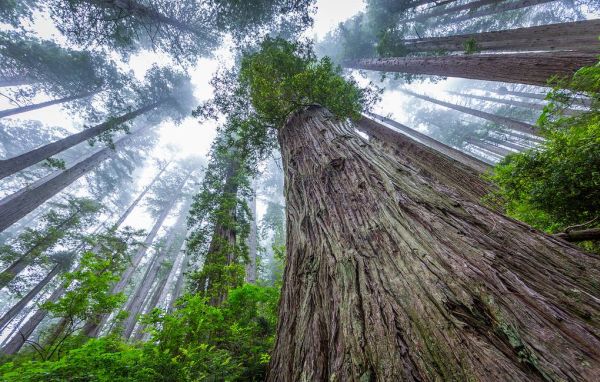 Using a laser from the ISS, ecologists have calculated the exact biomass of California redwoods – the largest and tallest trees in the world. The largest of them weigh about 110 tons, scientists write in the journal Scientific Reports.

“We are trying to figure out how best to deal with global warming – to plant new trees or protect existing forests. To answer this question, you need to know how much carbon is stored by trees of different species. This is the first time we have carried out such measurements for redwoods from northern California, where some of the largest ecosystems in the world “, – said one of the authors of the study, professor at University College London Mat Disney.

All plants on Earth continuously absorb carbon dioxide from the atmosphere and convert it into their biomass. Scientists believe that different plants absorb CO2 and also return it back to the atmosphere at different rates. It can also vary greatly between plants of different ages.

Therefore, climatologists cannot yet accurately predict how the planet’s forests will react to an increase in the concentration of CO2 in the atmosphere and how this process will affect the formation of their biomass. On the other hand, the answer to this question is very important in order to develop a strategy to combat global warming.

Census of all trees in the world

As part of the new work, Disney and his colleagues decided to draw the first three-dimensional map of California forests using the GEDI orbiting laser radar. These forests are made up mostly of sequoia sempervirens, the largest coniferous trees on the planet that can live up to several thousand years and reach heights of one hundred meters or more.

Using the resulting map, scientists calculated the volume of trees, their biomass, as well as typical and maximum indicators for sequoias. For example, they found that the tallest and largest members of the Sequoia sempervirens species can weigh up to 110 tons. In general, measurements showed that the total biomass of California’s coniferous forests was about 30% more than scientists had assumed.

In the near future, scientists plan to use GEDI for similar research in other forests on the planet. Disney and his colleagues hope that this will allow climatologists to accurately assess the contribution of forests to the CO2 cycle in nature and understand which strategies to combat global warming will be most effective in this case.