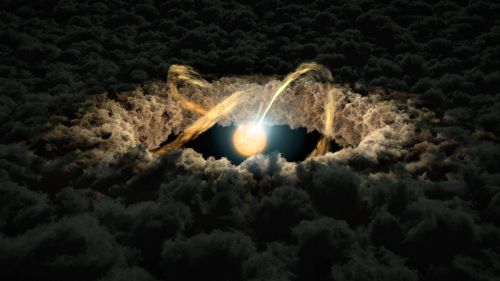 Watching a protoplanetary cloud around a young star, scientists could establish the sizes of his particles – motes from which the planetary system will soon be created.

In article published by the Astrophysical Journal Letters magazine, scientists report about observations of a star of HD 142527 which were made on the radio observatory of ALMA located in Chile. The star is in only 500 light years from us, and her age is estimated only in 5 million years (on Earth then dinosaurs have died out for a long time and with might and main there was a development of ancestors of the person), and at her the system of planets only has begun to be formed.

To find out the sizes of particles of a gas-and-dust disk which surround a star and little by little put more and more large educations, scientists used partial polarization of the radio waves passing through this cloud. She differs from previous much: according to new data, their size averages only 150 microns.

Before such works relied on dispersion of the radiation passing through gas-and-dust clouds simply representing particles spherical. Authors of new work could do without this simplification therefore the assessment is considered more reliable. And if it so, then astronomers have to reconsider many views of the mass of protoplanetary disks and processes which develop in them.