Scientists have confirmed the lightning speed of the development of Siberia 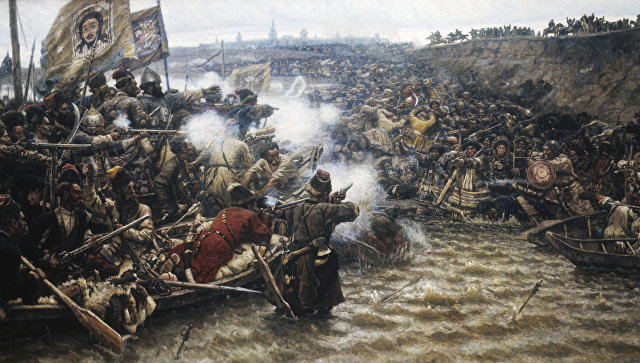 Following the trail of Siberian pioneers, the archaeologists of Tyumen State University investigated their parking in the Karachinsky Island (Lower Pritobolye) and confirmed the high speed of the trek.

The figure of Yermak is known to every Russian, and the significance of the Siberian expedition is emphasized by a whole host of chronicles and other literary sources. But on their own they can not give an exact answer to the question of the details of the campaign, its quantitative and qualitative composition. Therefore, scientists are actively developing systematic archaeological research in this direction.

Checking the annalistic information about the wintering of the Ermak detachment on the Karachinsky Island in the floodplain of the Tobol River in Western Siberia, the expedition of the Tyumen State University conducted excavation of a dugout surrounded by a moat at this site. The two-meter-deep depth of the quarry consisted of two log buildings, in which the four lower crowns of the log buildings survived. In the central part of the house on the eastern side of the furnace are the remains of the cellar. Construction did not last long, as the space around the dwelling was not mastered. This is evidenced by a small amount of household garbage with kitchen waste.

In addition, archaeologists have found Russian utensils, grindstone, ceramic scraper, slag and pieces of metal. The burned areas on the log logs showed that the dug-out was burning, after which it was repaired and some other small time served as intended.

By method AMS in the laboratory of the University of Arizona (USA) for cellulose from two samples of wood, the building dates back to the middle of the 17th century. While Ermak’s campaign fell, as you know, in the years 1581-1585.

The soil analysis revealed the peculiarities of the content of chemical elements in buried and modern soils. These “evidence” proved the intensive use of the island for keeping livestock (even before construction) and handicraft classes of residents. In particular, they repaired the inventory, armament. “Based on the dating of our finds in the 17th century, we believe that Ermak did not spend the winter there,” commented Natalia Matveeva, the head of the expedition, doctor of historical sciences, professor of the Tyumen State University.

In her opinion, other Russian pioneers stayed here, the memory of which was connected with the local population with the legend of Ermak. These data support the version of the two-month campaign of Cossacks from the Stroganov towns to the capital of the Siberian Khanate without wintering. “Such a course of the military campaign seems most tactically justified in conditions of weak resistance of the Tatar forces, fragmented by the participation of the Mametkul army in the raid on the Urals,” suggested Matveeva.

“I think the result is important, because it testifies to the lightning speed of the Cossacks’ advance,” she concluded.