Scientists have created a levitation gloves 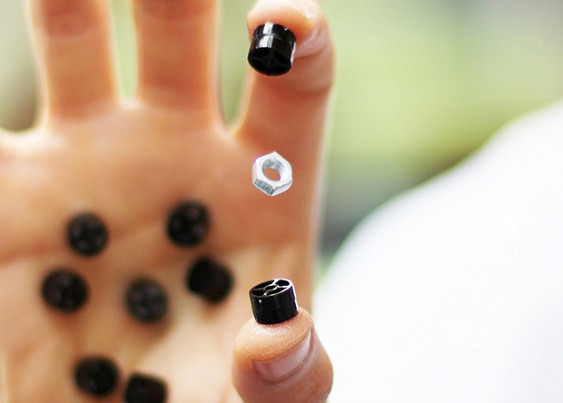 British scientists have created a prototype of gloves that use acoustic levitation to move objects, and showed it at the conference ACM CHI 2016. The researchers also introduced the sonic screwdriver and pliers.

The gloves, developed by scientists, are called GauntLev or Gauntlet of Levitation (levitation gloves). With the help of acoustic levitation they allow a person to carry out contactless gripping and moving small objects, both in the air and in the water. Unlike previous devices, these gloves can be moved together with the grasped object, which retains its position using the built-in stabilization system.

In addition to gloves, the researchers also created a sonic screwdriver that can not only contactless maintain the object but also rotate it. Manipulation can be done both manually and using a computer to improve the accuracy and speed of their implementation. The scientists also showed a prototype acoustic mites.

The device can communicate and be combined with each other. The researchers suggest that such gadgets will help to facilitate the work in conditions of weightlessness and interaction with brittle materials.

Acoustic levitation is the retention of an object in air with standing acoustic waves, which is formed by the interference of two plane waves with equal amplitudes propagating towards each other. To create the necessary standing wave acoustic emitter and a reflector. In the presented devices, it is probably using a holographic acoustic levitation — this means that they contain multiple emitters, which focus on the object by adjusting the phases of oscillations of the waves, and then, with the establishment of a difference between oscillation waves in the π-phase, is the management of objects. The reflector in this case remains focused on the subject.