Scientists have created a new form of matter 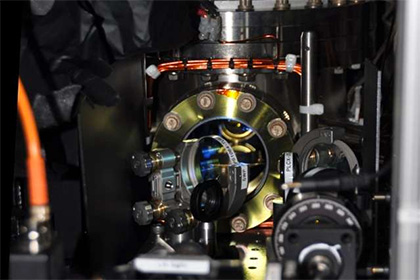 Scientists from mit in the US have created a superfluid solid of sodium atoms. For this purpose, they used the lasers, which they were able to give a quantum liquid (condensation Bose-Einstein) structure characteristic of crystals.

The condensate of Bose-Einstein is a substance formed by bosons — particles that can exist in the same quantum state. This distinguishes them from fermions (e.g. electrons), are subject to the Pauli exclusion principle. This property allows the bosons at very low temperatures to show visible to the naked eye quantum effects.

One of these effects is superfluidity, in which the quantum fluid can seep through the cracks without friction. If the quantum liquid forms crystals, the kind of matter called a superfluid solid (to supersolid).

Scientists have predicted that solid helium can become supercalcolo if its atoms are free to move within a solid crystal. However, observe this phenomenon in the laboratory so far could not.

With laser cooling, in which atoms emit more energy than they absorb, the researchers reduced the internal energy of the sodium atoms, which are bosons, to a minimum. After that, half of the bosons was changed spin (one of the quantum characteristics), resulting in the condensation Bose-Einstein was transformed into a mixture of two quantum liquids. Laser scientists have changed the spins of individual atoms, carrying them thus from one liquid to another.

According to physicists, the density of the condensate of Bose-Einstein spontaneous changes, forming ripples or waves. This condition is called the phase of the stripes (stripe phase), and its presence is characteristic of a superfluid solid.