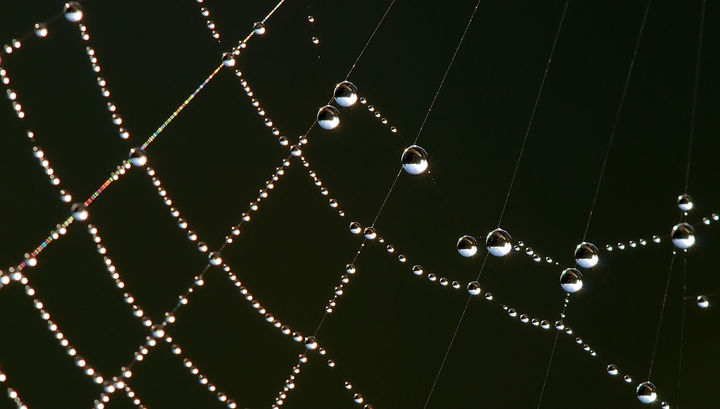 Spider silk is one of the most durable natural materials. Its unique properties inspired scientists to develop a fabric for body armor, “liquid” self-twisting wires, strings for violin, capsules for storing reagents and much more.

But the problem is that spider silk is very difficult to get at least in any significant amount. Unlike silkworms, spiders can not be grown on an industrial scale because of extremely high cannibalism. And silk itself is an incredibly complex structure of various proteins, sugars and lipids, which is difficult to reproduce in the laboratory.

Of course, such attempts have been made, but all of them are associated with high temperatures and toxic solvents. And finally, a team of researchers from Cambridge University managed to develop a fundamentally new approach, which is described in an article published in the journal PNAS.

Scientists have received their silk fiber from hydrogel, which is 98% water. The remaining 2% is silica and cellulose intertwined with each other and linked by molecular “handcuffs” – cucurbiturils. In this system, the fibers are capable of self-assembly at room temperature. Chemical interactions between components allow drawing very long and thin threads of gel. Their diameter is only a few millionths of a meter.

After getting the fiber for 30 seconds, the water evaporates, leaving a thread that has the highest strength and elasticity.

“Although our fibers are not as strong as the strongest threads of spider silk, they can withstand a voltage range of 100 to 150 megapascals,” says one of the co-authors of the study, Dr. Darshil Shah, in a Cambridge press release. “They are non-toxic And much less energy-intensive. ”

The strength of the new silk is superior to other synthetic fibers, such as viscose or artificial silk, as well as natural threads such as human and animal hair. Another major achievement of the technology has been making the material dampening properties, that is, the ability to absorb a large amount of energy, in particular, to quench fluctuations. This is one of the unique features of spider silk, which provides a web of its stability and preservation of functionality in natural conditions.

According to the developers, the new method of fiber production, thanks to its ecological and energy efficiency, is able to improve not only the existing methods of making artificial spider silk, but also other synthetic threads.