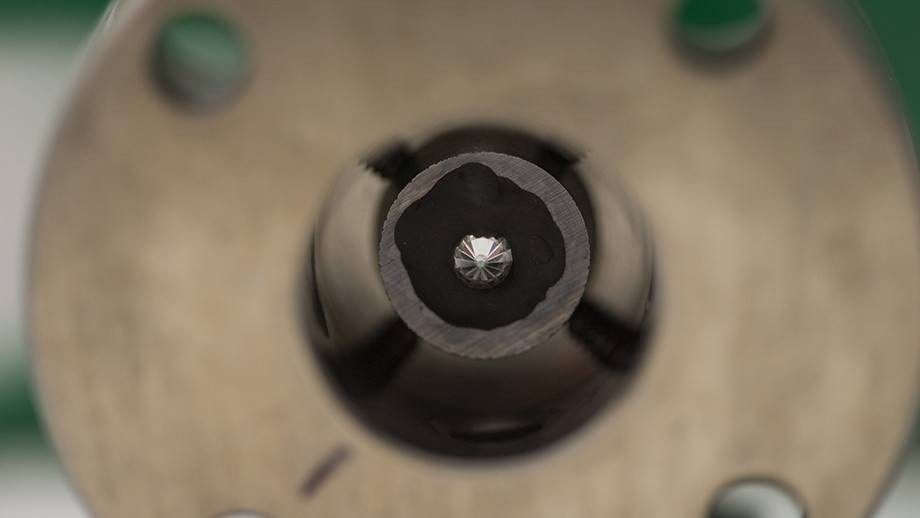 The Australian scientists for the first time synthesized pure crystals of a lonsdeylit – the carbon mineral capable to cut even diamond.

Diamond – a hardness synonym, however its close analog, lonsdeylit, even more firmly. It is the same carbon crystal, only a lattice at him not cubic, but hexagonal – by some calculations, pure losndeylit has to be more than one and a half times firmer than usual diamond and it is capable to cut him. However in the nature (in meteoric craters) he meets extremely seldom and in far from perfect and purity structures.

Not in the best way the situation and with artificial synthesis of this extremely useful mineral is. For this purpose graphite is required to be compressed under huge pressure and at a huge temperature that does process difficult, expensive, unprofitable – and all the same doesn’t allow to receive crystals of the necessary purity. A number of researches has shown that at the same time, probably, the cubic lattice with the broken structure, but not hexagonal is formed. It is assumed even that it is impossible to achieve it without enormous pressure in 170 GPA and temperature more than 6000 °C – as in meteoric craters.

However in article which scientists of the Australian national university have published in the Scientific Reports magazine the simplified approach to synthesis of a pure lonsdeylit is offered. For this purpose they used a diamond anvil – couple of crystals which hardness allows to achieve extremely high pressure in the place of their compression. Under the pressure of 100 GPA (1000 atmospheres) lonsdeylit it was formed already at 400 °C, temperature twice below by that that is used at usual approach.

According to authors, the turned-out nanodimensional crystals with a hexagonal lattice differ in high orderliness and purity. The tiny sizes of the received lonsdeylit of scientists not too confuse: in the future process can be improved, and for many applications and it is enough. “You won’t find such “diamonds” on wedding rings, – professor Jodie Bradby says. – Their place in mountain pits”.