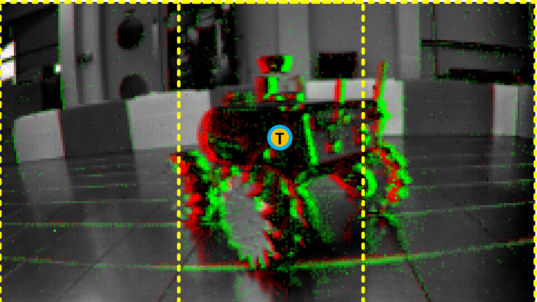 A team of scientists from the Institute of Neuroinformatics at the University of Zurich in Switzerland (INI) teaches robots to hunt other robots. According to the developers of the devices acting like a predator, is a necessary step in creating a machine that will be able to work with people in everyday life.

The project of Swiss researchers is part of the VISUALISE programme, funded by the European Commission. Her goal is to create equipment simulating the characteristics of the eyes of animals for different purposes.

Scientists say that such a predator like a lion, to hunt down and catch the victims need to quickly process an incredible amount of data. Most of this information, of course, visual, but sometimes a predator intuitively (through previous experience) guesses in which direction you run, say, antelope.

The developers found a way to give such abilities to robots. Reportedly, this requires a combination of two basic elements: a system of cameras of different kinds and a special type of a neural network (convolutional), which is programmed to work like the visual cortex of animals.

Thanks to these two components, researchers are teaching robots to see objects as their targets, and chase them. In the scientific article, which is available on the website of preprints arXiv.org they describe “neuromorphology” the camera, simulating some of the functions of the eyes of animals.

It is noted that the robot is also equipped with a special “silicon retina” that tracks real-time changes in ambient light, and does a series of frames, like an ordinary camera.

Robot predator handles the information coming from the outside world through the eyes of a camera, “deep neural networks”. She remembers the behavior of the “victims” to predict if the robot is to meet her again. In the future, the car will navigate the space better if you plan a similar goal.

The idea of using carnivorous robots may sound scary, but the actual application of this technology may be much more harmless and more widespread than it might seem at first glance, explains the researcher Tobi Delbrück (Tobi Delbruck).

For example, imagine a Luggage cart, which themselves follow people at the airport or at the station, he says. Thus, the technology will eventually be more like a couple of the “predator-victim”, and on a couple of “parent-child”. Although the fundamental principles are similar here and there, says Delbruck.