Scientists have discovered a new type of photosynthesis 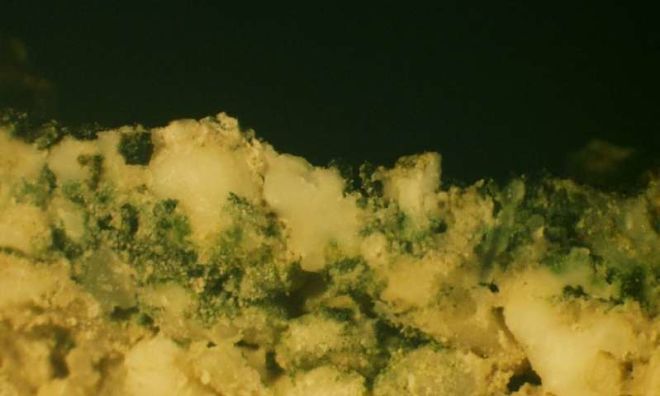 The vast majority of life forms on the Earth use visible red light in the process of photosynthesis. However, scientists have found that cyanobacteria living in shaded conditions, such as bacterial mats in Yellowstone and beach rocks in Australia, are photosynthesized using near infrared light.

A rock cut in Australia showing a colony of microorganisms (marked in green) that use chlorophyll f. © Dennis Nuernberg

With the standard type of photosynthesis, green pigment chlorophyll a is used to absorb light and to obtain useful biochemical substances and oxygen with it. The way chlorophyll a absorbs light means that only red-light energy can be used for photosynthesis.

Since chlorophyll a is present in all known plants, algae and cyanobacteria, it was believed that the energy of red light sets a “red limit” for photosynthesis; that is, the minimum amount of energy required to perform complex chemistry that produces oxygen. The red limit is used in astrobiology to judge the possibility of developing a complex life on other planets.

Until now it was believed that chlorophyll f simply collects light. A new study shows that this type of chlorophyll plays a key role in photosynthesis in shaded conditions, using low-energy infrared light to perform complex chemistry.

“This discovery forces us to rethink the existing ideas about photosynthesis and make changes in textbooks,” said lead author of the work, Professor Bill Rutherford of Imperial College London.