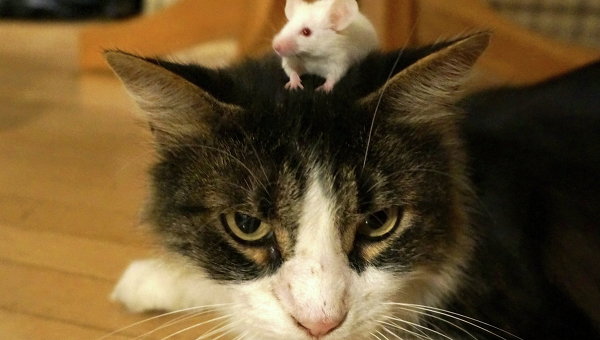 The parasite Toxoplasma gondii in domestic cats, often infecting their owners, manipulates the behavior of animals and even humans. It controls the levels of glutamate, an important signaling molecule between brain cells, according to an article published in the journal PLoS Pathogens.
“Don’t worry too much – we have lived with this parasite for a long time. Toxoplasma gondii does not want to kill us and lose your “home”. In order to avoid infection well enough to fry the meat and thoroughly washing hands and vegetables. Pregnant genisys, in turn, should not touch the tray with kitty litter and change its contents,” said Emma Wilson (Emma Wilson) from the University of California, riverside (USA).
Toxoplasma gondii (Toxoplasma gondii) is an intracellular parasite, usually living in the intestines of domestic cats. The prevalence of this pathogen among Pets and their owners forced scientists to draw attention to it in recent years.
It turned out that Toxoplasma gondii is able to change the behavior of the host, causing irreversible changes in the brain. They make mice “fearless” at the sight and smell of cats and people prone to suicide and irrational behavior, and inexplicable fits of rage.
Wilson and her colleagues uncovered a possible mechanism of how Toxoplasma manages to change the behavior of his master and to manipulate his brain, observing the changes in the mouse brain upon infection with toxoplasmosis.
As it turned out, after penetration of Toxoplasma into neurons significantly changed their interaction with molecules of glutamate – an amino acid that plays a role of one of the chemical carriers of information between nerve cells.As a rule, the more of this substance in the extracellular environment, the more “talk” of brain cells. The increase of its concentration may lead to extremely negative consequences – inflammation and death of neurons.
Toxoplasmosis, according to the observations of life mice, results in an as-yet unknown reasons, to disable the gene GLT-1 and is connected to the “system cleaning” extra molecules of glutamate in the so-called astrocyte – specific cells surrounding the neurons and protecting them from infections and damage. As a result, the glutamate begins to accumulate in the brain, which can cause the changes in behavior that are associated with the presence of Toxoplasma in the body of mice and humans.
“We were the first to show that infection with toxoplasmosis leads to violations in the work of one of the key signal substances in the brain. This discovery shows that the idea of relatively calm and not dangerous for the body character of chronic infection of Toxoplasma gondii is incorrect. You need to understand the risk and the dangers are similar changes in brain chemistry,” concludes Wilson.