Scientists have discovered how the ancient people were sleeping 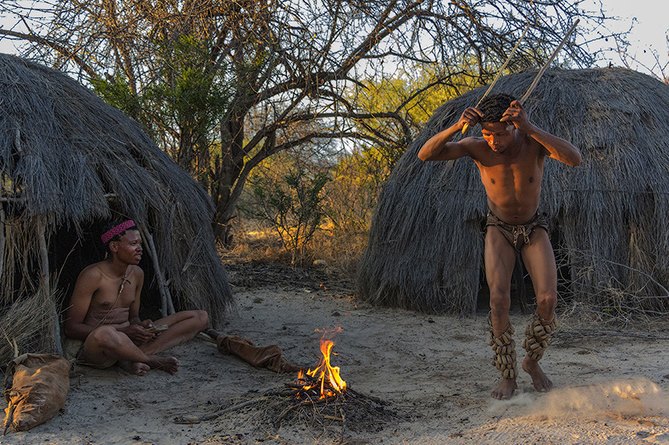 Modern Indians and African natives-the hunters sleep as much as we are, so our problem may be not so much chronic lack of sleep, as the quality of it.

You can often hear that modern urban life disrupts natural biological rhythms of our body – primarily due to the fact that electric light allows us not to pay attention to the coming night and to stay awake, although all physiological instructions inherited from ancestors, we need to sleep already. Appeared smartphones, laptops and other gadgets only made the problem worse. We go to bed late, sleep poorly, and Wake up early. Due to chronic lack of sleep there are different disease, not only a psycho, but also, for example, disorders of the metabolism.

From here it follows implicitly that in the past, in the pre-industrial era, people slept longer. This, however, I doubt the anthropologists from the University of California in Los Angeles. How can be these days to learn about the lifestyle of the former people, especially, if we are talking about prehistoric ages, from which there were no written records? You can refer to archaeological and paleobiologii, and to go to Africa to the present-day tribes who still live by hunting and gathering – indeed, their pace of life had to remain the same as our ancestors.

Jerome Siegel (Jerome M. Siegel), together with colleagues went to the “wild ethnic groups” in Africa and South America, taking the gadgets that can help you evaluate how much people spent in sleep, how many went, until sleep, how long was the light day. These devices are needed around the clock to wear on the belt within 28 days. The experiment is monitored with the Indians chimane in Bolivia, the people of the hadza in Tanzania and the Bushmen in Namibia.

In an article in Current Biology, the authors write that the Bushmen and hadza, and tsimane spent in bed from 6.9 to 8.5 hours at night, and actually sleep spent a 5.7–7.2 hours, in the winter most of the volunteers slept for an hour longer. Do not go to bed with the sunset, and after 2.5–4.4 hours after, that is, when the temperature significantly dropped, got up just before dawn, when the temperature dropped to a daily minimum. Only the Bushmen slept for another hour after sunrise. None of the natives did not Wake up at night (although it is believed that “natural people” sleep dual sleep, waking up at night for a while). None of them suffered from insomnia, for which their languages were not even words. And, importantly, none of them complained about the lack of sleep, on daytime sleepiness, the desire to take a NAP.

It turns out that pre-industrial hunter-gatherers sleep as much as modern, civilized people: a large-scale study conducted in 2002, the American cancer society, showed that most of us are sleeping an average of 6.5-7.5 hours. It is possible that our difference from the pre-industrial people is not how much we sleep and how we sleep. And it can be not just about whether we Wake up at night or not, but in some deeper interaction of organism and environment during sleep. The researchers believe that an important factor may be temperature, and it is possible that for a good night’s sleep we need to cool the air in the room, imitating the cool of the night.

It should also clarify that when talking about General health consequences of poor sleep, it often have in mind not only and not so much quantity, how much he circadian rhythm. In the dream, you can spend the right amount of hours, however, if you go to bed the day, at night, early morning, early evening, the body clock will become worthless that be bad for the health.