Scientists have discovered how the sunflower turns to the Sun 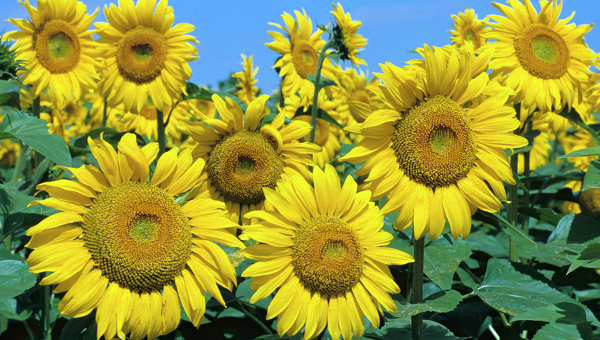 Sunflowers have an amazing ability to constantly look at the Sun through mutation, to change their internal clocks so that they are extremely unusual conduct by the growth of cells, causing the inflorescence to rotate from East to West in the daytime.

What plant has the idea of when and where the Sun rises, led me to suppose that there is a connection between the biological clock and the chain of proteins and genes that control the growth of sunflowers. In addition, so the flower receives more light, it also attracts more bees, as they like warm surfaces, said Stacey Harmer (Stacey Harmer of the University of California, Davis (USA).

Based on this assumption, Harmer and her colleagues uncovered one of the oldest and most interesting mysteries of botany, studying the so-called circadian rhythms that govern all the processes within the cells of plants and animals depending on the time of day, and their impact on work oxine – protein growth stimulant.

For this the authors grew several sunflowers, some of which landed in the lab, where ever light was on, and the other on a normal field. Part of the plant scientists was cemented in the tubs so that they could not turn around the Sun, which allowed them to assess the consequences of the refusal of such evolutionary adaptations.

In disclosing the principles of this movement they helped an ingenious technique, invented by one of the authors – biologists took the marker and put it on the stem of a sunflower a few points, they’d been tracking with a camera. If the distance between them were varied, it meant that the stem of the flower grew where he was drawn these points.

Observations showed that motor in the movement of the flower was the internal clock of the plant – a set of light-sensitive proteins and associated genes that control various life processes associated with the onset of day, night, morning and evening.

If the length of day has varied artificially, the sunflowers have lost the ability to navigate by the Sun even if the artificial light source was moving across the sky in the same way as the real light. This immediately had a negative effect on the rate of growth of a flower, set of biomass and the development of seeds.

Flomastery point told about how it happens – it turned out that this watch affect the motion of a flower in two ways: controlling the speed of growth and forcing one side of the stem to grow faster than the other. Because of this, the sunflower is gradually rotated in the daytime, following the Sun.

Such traits of sunflower may be one unexpected evolutionary plus – as found by Harmer and her colleagues, bees like warm colors, especially in the morning, and turn to the Sun helps the flower to warm up faster and attract more pollinators.