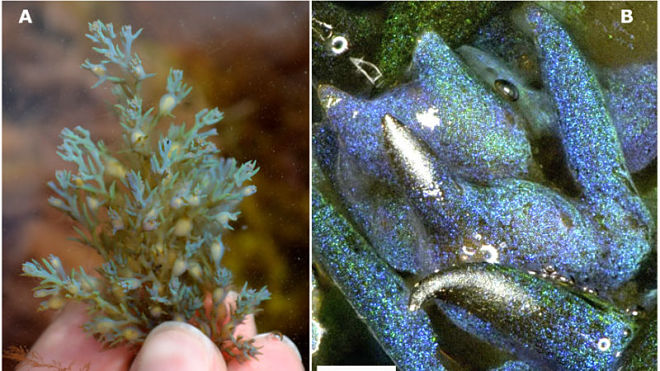 When British scientists first saw the algae Cystoseira tamariscifolia, they were impressed by their appearance: the plants were poured into the light like a precious stone. The team looked at them under a microscope and found that inside their cells there are crystals similar to opal.

“These are living jewels that exist in the environment. Real algae Faberge! “, Said the author of the study Heather Whitney from the University of Bristol in the UK.

C. tamariscifolia is a common brown alga that occurs in Europe and the Mediterranean. Looking at it under a microscope, you can see a shimmering iris. A more thorough analysis shows two to three fat-filled vesicles in each of its cells. Inside these bags, a number of spherical fat globules line up in a three-dimensional lattice, similar to the structure of the crystal lattice of silicon dioxide in opals. In addition, algae can change the arrangement of spheres, thus regulating the scattering of light within cells.

Algae C. tamariscifolia lives in coastal areas. At any time it can be both under water, and on the sand under the scorching sun. Whitney believes that such mechanisms help the algae to direct incoming light into its chloroplasts, where photosynthesis takes place when the plants are under water and reflect excess light in the bright sun on the surface.

In the opinion of the author, the discovered natural structure can be used in engineering, and this will not be the first case of creating inventions inspired by nature.