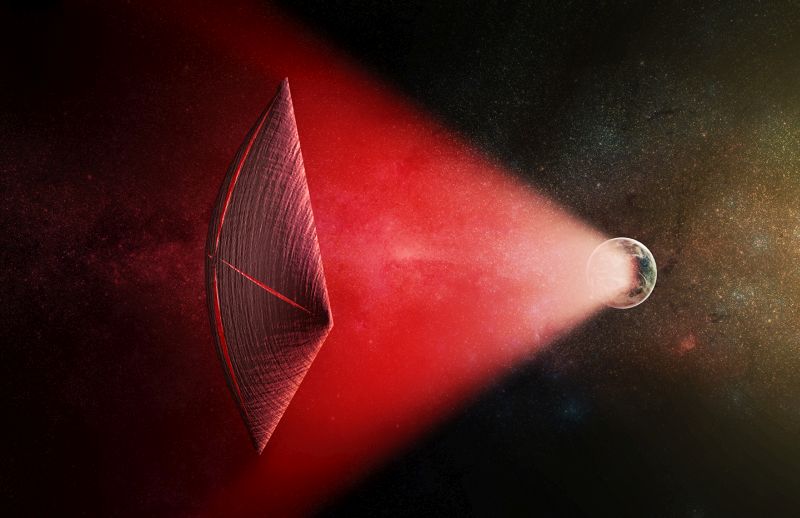 In search of alien civilizations, scientists tried to find various of their signs, ranging from radio transmissions to laser flashes, but all without success. However, a new study suggests that the strange phenomenon of fast discrete radio pulses can be evidence of advanced alien technology.

Such impulses can be evidence of the operation of transmitters the size of a planet that transmit energy to interstellar spacecraft in remote galaxies.

As the name implies, fast discrete radio pulses are millisecond bursts of radio emission. They were first discovered in 2007, and since then scientists have detected no more than two dozen such impulses. All of them come from distant galaxies, which are at a distance of billions of light years from the Earth.

Avi Loeb of the Harvard-Smithsonian Center for Astrophysics and Manasvi Lingham of Harvard University considered it possible for the existence of such a powerful radio transmitter to notice its action at such a huge distance. They found out that if the transmitter is powered by the shining of a star, its light should fall on a planet twice the size of the Earth in order to generate the necessary energy for pulses of this power. Such a huge design is far beyond technology, even potentially capable of being at the disposal of mankind, but it is quite possible from the point of view of the laws of physics.

Lingam and Loeb also figured out whether the existence of such a transmitter is possible from an engineering point of view, or if such an amount of energy would simply melt any structure. And again they found out that a water-cooled device twice as large as the Earth could endure such heat.

Then the scientists wondered why such a massive installation is needed at all, and made the assumption that it could well give acceleration to interstellar light sails. The energy received is enough to move millions of tons of cargo. “This is quite enough to transport live passengers through interstellar or even intergalactic distances,” Lingam says.

To transmit energy to the light sail, the transmitter must be constantly focused on it. Observers on Earth only see a brief flash of the signal, because the ship, the installation, the star, and the galaxy itself are constantly moving relative to one another, as a result of which the radio beam points to us only for a brief moment. Repeated observations of the ray were recorded, but they did not find any astrophysical reasons.

Loeb admits that his work is purely speculative. When asked if he really believed in the rational origin of discrete radio pulses, he replied: “Science is not a matter of faith, but evidence. If we decide that we can not consider something that is beyond our capabilities, then this significantly reduces the range of potential research. So it’s better to express different ideas, and let the obtained data decide whether our assumptions are true or not. “