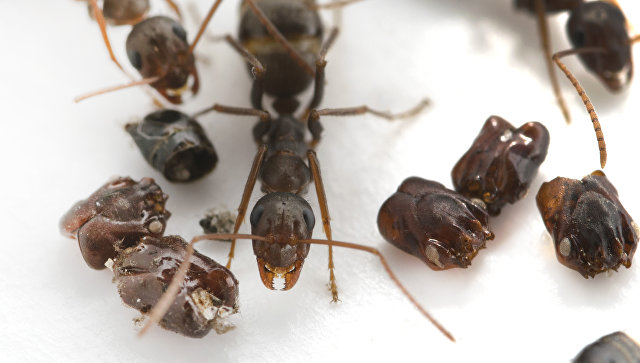 The harmless red ants living in the forests of Florida turned out to be secret “bounty hunters.” They kill larger ants with acid spitting and collect their skulls in their anthills, writes a naturalist who published an article in the journal Insectes Sociaux.

“Back in 1958, when these ants were discovered, scientists noticed something unusual. Their anthills and their environs were littered with the severed heads of giant odontomachs, which even spiders fear and respect. Nobody knew where they could come from in the colonies of their modest Red cousins, “- says Adrian Smith (Adrian Smith) from the University of North Carolina in Raleigh (USA).

Ants and other social insects, such as bees or termites, appeared in the days of dinosaurs, and over the next hundreds of millions of years of evolution, they developed the most diverse and often extravagant lifestyles.

For example, today on Earth there are about two hundred species of ants, “farmers”, growing the same mushrooms and eating their fruit bodies over many millions of years. Many of their cousins ​​living in the tropical forests of the Amazon, completely abandoned the permanent colonies and went on a “nomadic” way of life, while others have learned to seize other people’s anthills and turn their inhabitants into their slaves.

Smith revealed the secret of one of these bizarre species of these insects, observing the life of the colonies of common red ants (Formica archboldi) living in the forests of Florida and other southern regions of the United States.

Initially, as the scientist notes, he was not interested in the mystery of why these ants collect the skulls of larger relatives, but what chemical signals they use to communicate with their own kind and representatives of other species.

Much to his surprise, red ants from Florida produced quite a different set of smells, like other members of the genus Formica. In most cases, their pheromones were virtually indistinguishable from those volatile substances that were produced by Odontomachus ants (Odontomachus), whose skulls are often found in their anthills.

This is a very strange coincidence from the point of view of evolution. As a rule, insects use these signals in order to distinguish representatives of their species from other ants, rather than trying to resemble each other if one of them does not lead a parasitic lifestyle.

Moreover, given that odontomahs have long been considered among the most dangerous and ferocious predatory ants in America, it would be logical to assume that red ants would have to be very different from them in order to avoid collisions with these giants.

This led Smith to a paradoxical thought – Formica archboldi could purposefully hunt these giants, using their scent as a means of “camouflage.” Accordingly, their skulls should not be random “decorations” of the colonies of red ants, but traces of the “dinners” of the latter.

He tested this idea by catching a few odontomachs and dropping them into a small laboratory colony of Florida red ants and other members of the Formica genus. Subsequent observations helped him to reveal the secret and very powerful weapon Formica archboldi.

It turned out that these ants can really kill odontomakh, moving closer to them and firing a stream of acid at them in the “face”. One such shot, as shown by observations using a high-speed camera, was enough to cause a serious injury to a predatory ant, and completely paralyze it in 70% of cases.

When this happened, the author of the “shot” carried his victim to a colony, where she lost her head and was eaten by the hunter’s relatives the next day.

Interestingly, the closest relatives of Formica archboldi did not behave in this way, but their acid also caused paralysis in odontomachs. This suggests that the Florida red ants evolved from “omnivorous” insects into narrowly specialized “bounty hunters”, the main source of food for which became one of the most dangerous invertebrate forest dwellers.