Scientists have established what the inhabitants of Pompeii ate 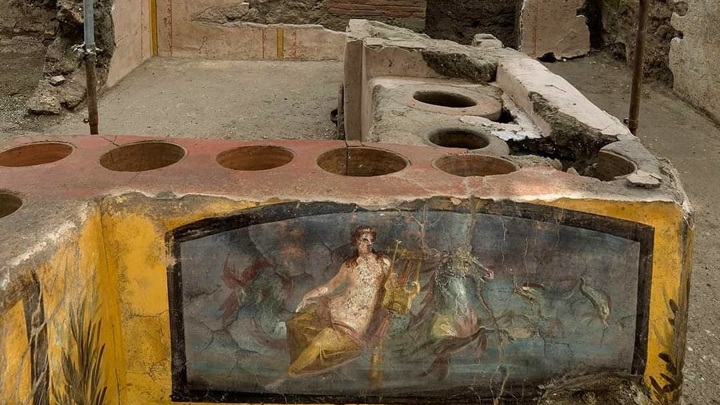 In the ancient Roman city of Pompeii, which died as a result of the eruption of the Vesuvius volcano in the 1st century AD, a new unique find was made: there was discovered a street kiosk selling food, both raw products and ready-made meals.

According to the director of the Pompeii archaeological park, Massimo Ozanna, the discovery of such a kiosk is not in itself a remarkable thing; it is known that there were a lot of them in Pompeii – scientists already know about 80 such shops for ordinary people. However, this time the specialists managed to restore the food that was sold there. “In addition, the frescoes that also describe the products on offer are preserved on the counter,” Ozanna said.

According to him, the current find makes it possible to understand that Pompeian chefs prepared “incredible mixtures of fish and game,” that is, they mixed different types of meat, and also added it to fish dishes. Thanks to the material preserved under the lava, specialists in zoology working as part of a group of scientists were able to identify carcasses of ducks, bones of pigs, sheep and goats, as well as birds and snails.

The director expressed the hope that tourists will be able to inspect the kiosk on Easter, when the museums now closed due to the coronavirus pandemic will be able to resume their work, writes TASS.

Excavations in Pompeii are ongoing. So, in recent months, the bodies of a master and a slave were found there, killed by heat shock. A painful death overtook the people as they tried to hide from the eruption.