Scientists have explained to whom it is useful to have land 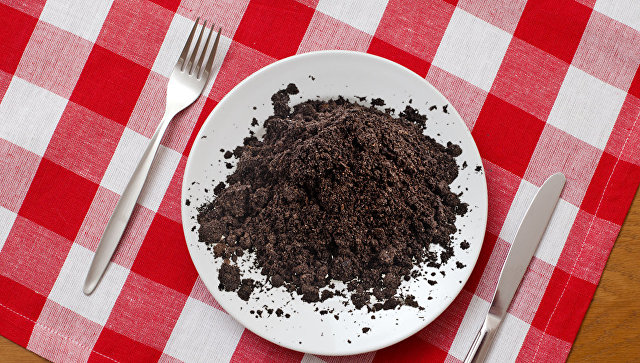 Stones in the stomachs of poultry and fossil reptiles are not uncommon. Eat in soil and some people. In science, this is called lithophagy and geophysics. What hypotheses have scientists put forward to explain this phenomenon?

According to the Food and Agriculture Organization of the United Nations, the use of insects for food can solve the problem of global hunger and improve the level of health around the world

In the Indonesian village of Taban every morning, locals go to the rice fields. But their goal is not rice, but soft and moist soil, from which, with the help of sticks, a bamboo knife and fire, they will prepare a traditional dish – ampou. Indonesians believe that the earth helps with headaches and toothaches, and if it is eaten during pregnancy, the newborn will have healthy and beautiful skin.

The Taban peasants are not the only community on the planet that considers the soil suitable for food. Geophagy is found among the tribes of the Amazon basin and South Africa. The soil was eaten in India – the “clay of the Moguls”, in New Zealand – the English were discouraged, realizing that the “oatmeal of the natives” consists of a grayish-yellow primer of volcanic origin. Two centuries ago, land was also eaten in Russia – on the coast of the Sea of ​​Okhotsk used edible clay, known as ground sour cream. 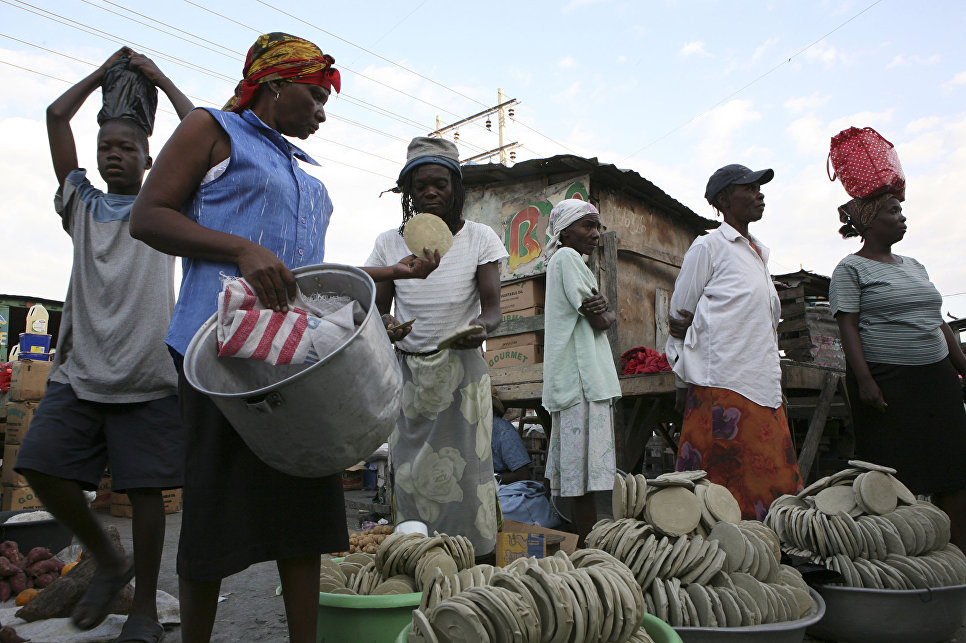 Sale of flat cakes from the mud in the market in Port-au-Prince, Haiti

Today in developed countries, the cases of human eating stones and soil are recorded only with depressions and mental disorders. Our brothers are smaller.

Among the lithophagous animals with a muscular stomach – birds, reptiles, amphibians and some species of fish prevail. For example, gastrolites (the so-called stones in the stomach) are found in herbivorous dinosaurs. Of mammals, only the pinnipeds swallow stones. Others often eat the soil. In the book “Lithophagy: geological, ecological and biomedical aspects” Russian biologist Alexander Panichev notes that a hundred kilogram reindeer eats from one to five kilos of clay at a time, and an elephant weighing five tons can absorb it with buckets. 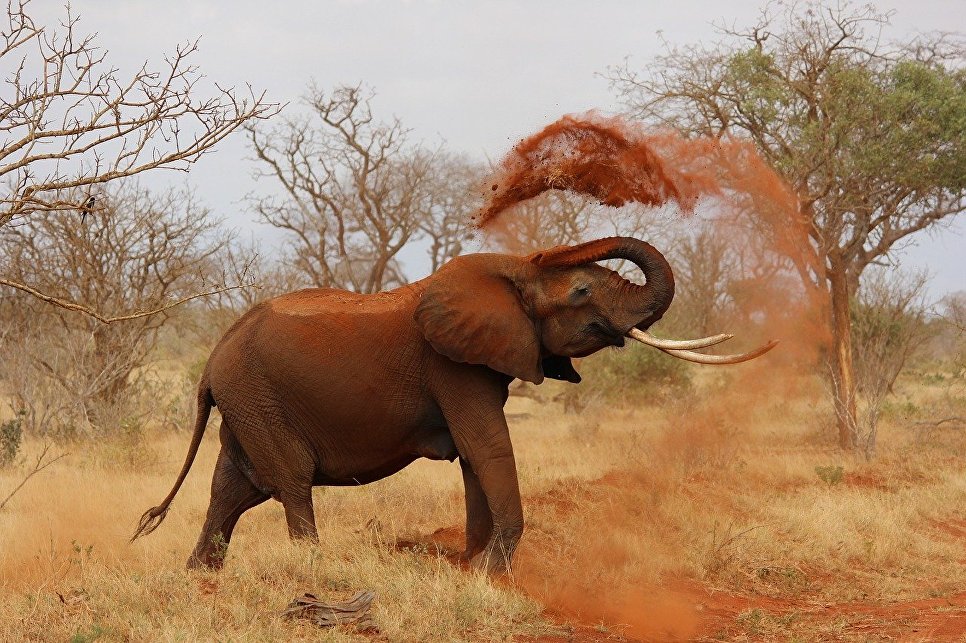 The mineral composition of stones and land consumed by birds, reptiles, amphibians is the same and almost does not depend on where they live. These are, as a rule, quartz crystals or fragments of silicified rocks, feldspar. In mammals, on the contrary, the tastes are very diverse and are related to the climatic conditions in which they live – the climate determines the nature of weathering of rocks and, accordingly, the composition of secondary minerals.

To get the stomach to work, the toxins are washed out

Scientists believe that lithophagy is a way to fill a deficiency in the body of nutrients, but what exactly – there is no consensus. The most common hypothesis: absorbing stones and soil, animals, especially herbivores, eliminate the lack of sodium in the body. Therefore, their ration is dominated by plants enriched with a deficit element (mostly water species), mineralized waters and rocks.

However, this theory does not agree with the data that Aleksandr Panichev cites in his monograph: half of the species of mammals and all birds, sodium from the earth is not easily digested.

According to another version, minerals normalize acidity in the digestive tract. Getting into the intestines, they sorb phosphorus and other substances that play the role of weakly acid electrolytes. This is the basis of another hypothesis, according to which animals use natural sorbents as antidotes. Experiments have shown that rats and monkeys swallow the ground in order to neutralize poison that has entered the body.

Researchers from the Far Eastern Branch of the Russian Academy of Sciences, who studied lithophagy for more than thirty years among the animals of the Sikhote-Alin and the Caucasus, found that water in the hot springs around which the animals had eaten the soil is enriched with rare-earth metals, as well as clay rocks.

Meanwhile, data have accumulated that the elements of the lanthanide group accumulate in the glial tissues of the brain, participate in metabolism, coagulation of the blood, contribute to the removal of inflammatory processes. Proceeding from this, scientists suggest that eating stones and earth helps to overcome stress and strengthen immunity. 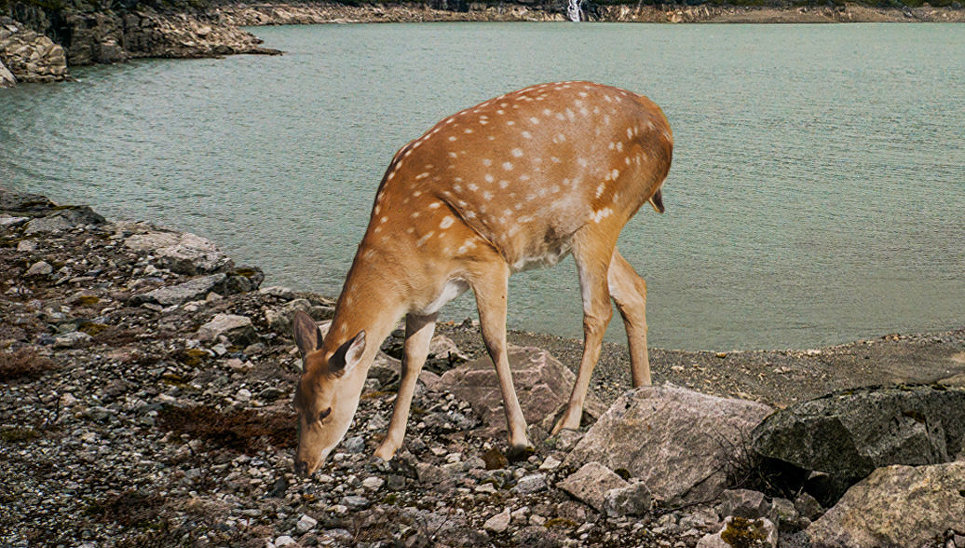 Researchers from the University of Lagos (Nigeria) have shown that clay soils can contain microorganisms that produce antibiotics, which in turn helps to resist microbes and infections. Perhaps that’s why about 80 percent of Africans practice geofagy. However, European researchers warn: this dietary habit is very harmful to health, especially pregnant women and their future children, and contributes to anemia.