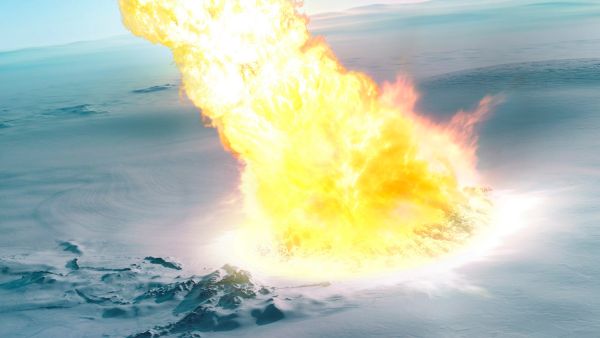 A team of researchers from the United States and Austria analyzed the remains of ancient asteroids on Earth and modeled the consequences of their fall to Earth. It was possible to show that similar events in the Archean, 2.5-4 billion years ago, occurred much more often than previously thought, and to find out that all this seriously affected the rate of filling the Earth’s atmosphere with oxygen. An article about this was published in the journal Nature Geoscience.

When large asteroids or comets collided with the early Earth, the energy released thereby melted and evaporated the rocks in the earth’s crust. Small droplets of molten rock condensed in the air, solidified and fell back to the ground, turning into rounded formations. These formations, called spherules, are found in large quantities in the ancient layers of the earth’s crust, whose age varies from 2.4 to 3.5 billion years. Layers containing Archean spherules are considered markers of ancient encounters, and more are being found in recent years. In fact, the level of recorded ancient impact events has increased by an order of magnitude in recent years.

It has now been discovered that the early bombing of the Earth could also seriously delay the oxygenation of the Earth’s atmosphere, affecting the balance between its production by anaerobic photosynthetic microorganisms and the burning of oxygen in disasters. The new research is in line with geological data, which shows that atmospheric oxygen levels varied unevenly and remained relatively low during the early Archean Eon. Its deficit may have been facilitated by the fall to Earth of 10 km asteroids with an average time between successive impacts of about 15 million years, during which enough reactive gases were produced to bind all free atmospheric oxygen. The realism of such a picture is evidenced by periods of sharp, but temporary jumps in the concentration of atmospheric oxygen, which took place about 2.5 billion years ago.

At the very beginning of the Proterozoic, about 2.4 billion years ago, during the last phase of these bombings, the Earth experienced a serious change in the nature of precipitation accumulation, caused by an increase in the oxygen content in the atmosphere, called the oxygen catastrophe, or oxygen revolution. Among the proposed explanations for this jump, there was a sharp increase in the production of oxygen by microorganisms such as cyanobacteria, and a decrease in the amount of gases in the atmosphere capable of binding oxygen, and a decrease in their supply from volcanic sources or by gradual leakage into space. Obviously, asteroid falls also contributed to this balance.

Oxygen photosynthesis among microorganisms originated 2.7-2.8 billion years ago. At first, the oxygen released was immediately spent on the oxidation of rocks and atmospheric gases, but after all the available rocks were finally oxidized, free oxygen began to accumulate in the atmosphere and allowed aerobic organisms that absorb oxygen to develop. Over time, after the oxygen revolution, asteroid collisions became less frequent and not catastrophic enough to have a serious impact on the oxygen level in the atmosphere. The Earth has finally become the planet that we are used to seeing it now.