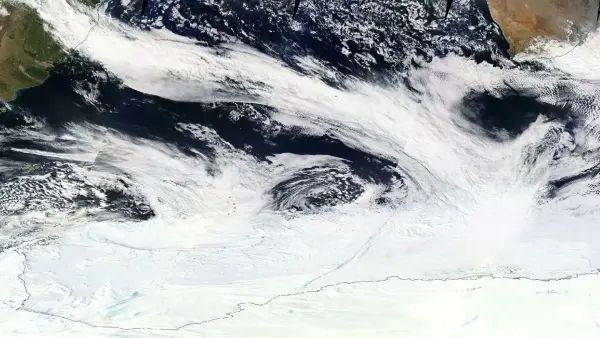 Huge holes in the sea ice off the coast of Antarctica were formed due to warm air currents, scientists came to this conclusion. The research results are published in the journal Science Advances.

In the winter of 1973 in the ice of the Weddell Sea off the coast of Antarctica, a gigantic ice hole suddenly formed. Again and in the same place, a space of open water appeared in late winter and early spring 2017.

Researchers from the United States, Australia and the United Arab Emirates have studied the patterns of hole formation in the sea ice of the Southern Ocean and found that they appear under the periodic narrow streams of warm moist air known as atmospheric rivers.

“Polynyas have a profound effect on the physical and ecological dynamics of the Southern Ocean,” study co-author Kyle Mattingly, a research associate at the Institute for Earth, Ocean and Atmosphere at Rutgers University, said in a press release. “They serve as giant windows in the marine ice, which allow large amounts of heat to move from the ocean to the atmosphere, altering regional and global ocean circulation. They also affect the timing and extent of phytoplankton blooms, which form the basis of the marine food web. ”

Atmospheric rivers bring warm, humid air from the coast of South America to the polar region, heating the surface of the sea ice and making it vulnerable to melting. Previous studies have shown that warm air currents are affecting ice melt on land and ice shelves in West Antarctica. The new work demonstrates for the first time their impact on sea ice in the Antarctic region.